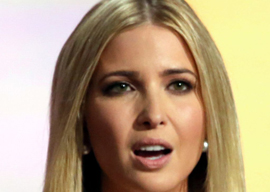 The Week’s Most Inveterate, Degenerate, and Confederate Headlines

GAY LAWYER HASSLES IVANKA TRUMP ON A PLANE
Ivanka Trump is the beautiful and eminently bangable blonde daughter of President-Elect and Emperor-to-Be Donald Trump. She is such a prize specimen of femininity that her father once agreed she’s a “piece of ass“ and that if she wasn”t his daughter, he”d probably be dating her. Unlike her half-sister Tiffany, who is widely suspected of being a family embarrassment, Ivanka was deeply involved in her father’s presidential campaign and will be active in his administration. She is so wonderfully humble that she routinely flies in coach rather than first-class with her family.

Because gay New York progressives hate everything that is righteous and beautiful and seek to destroy it until everything is as obnoxious and poop-smeared as they are, a vile and dirty lawyer named Daniel Jennings Goldstein harassed Ms. Trump as she was seated with her husband and three children among the commoners on a JetBlue flight last Thursday. Goldstein is married to another man named Matt Lasner, and through some mysterious miracle of birth, they were able to have a child together.

According to a witness, Goldstein began “visibly shaking” when he saw Ms. Trump on the plane, presumably because he has the emotional maturity of a toddler. He allegedly began saying aloud:

Oh my god. This is a nightmare….Your father is ruining the country, and now they ruin our flight….Why is she on our flight? She should be flying private.

Because our country is headed back toward greatness and will no longer tolerate the emotionally stunted public hissy-fits of gay lawyers who cannot tolerate ideological diversity nor accept electoral humiliation, Mr. Goldstein, his “husband,” and their Miracle Gay Baby were promptly removed from the plane.

“Islamophobia is a serious disease. You catch it from Muslims.”

ANOTHER VIBRANT AND DIVERSE PRE-CHRISTMAS BUS ATTACK IN GERMANY
Because Islam is the religion of peace and Europe is unbearably white, the EU’s unelected overlords have been inundating the Pale Continent with a spicy dark brown infusion of Muslim men who enjoy raping white women and destroying Western culture.

Last Monday an African refugee named Anis Amri hijacked a bus in Berlin and plowed through a crowd of people at a Christmas market. The attack left twelve dead, including the original driver, and fifty-six injured. Amri, who arrived via raft from Africa in 2011, escaped after his attack from Germany to Italy, where he was shot dead by a policeman on Friday. The mass attack was reminiscent of a cargo truck assault that led to 87 deaths in Nice, France in July.

Islamophobia is a serious disease. You catch it from Muslims.

FRENCH MAYOR CALLS MUSLIMS A “PROBLEM,” WILL BE TRIED ON “HATRED” CHARGES
Robert Menard is the mayor of Beziers, France, and is described by the BBC as “France’s strongest far-right mayor,” although we are unsure whether he achieved this designation through arm-wrestling or power-lifting.

During a September 5 interview with a French news channel, Menard made the following unforgivable comments:

In a class in the city center in my town, 91 percent of the children are Muslims. Obviously, this is a problem. There are limits to tolerance.

Also in September, Menard used Twitter to describe the infusion of hostile Muslims into Europe as “the great replacement.”

Because of these comments, he is now facing trial on March 8 on charges of “incitement to hatred or discrimination.”

However one may feel about Muslims, we see nothing wrong with inciting hatred toward the EU tyrants for criminalizing any speech by indigenous Europeans who dare to protest their ongoing and obviously pre-planned erasure.

CARL PALADINO GOES APE ON MICHELLE OBAMA
Businessman Carl Paladino has the most severe case of anus eyes of any failed gubernatorial candidate in New York State history. But he can be forgiven for this accident of nature due to some highly salty comments he made about affirmative action recipient Michelle Obama.

Miz Obama, who last month was described by a West Virginia mayor as an “ape in heels,” once again fell victim to the suggestion that she is simian in origin. In an interview with an alternative publication in Buffalo, Paladino was asked about whom he”d like to see “go away,” and he chose Michelle Obama:
“¨

I”d like (Michelle Obama) to return to being a male and let loose in the outback of Zimbabwe where she lives comfortably in a cave with Maxie, the gorilla.

After the predictable public scolding, Paladino remained unbowed. In an official statement, he said his comments had nothing to do with race (presumably because gorillas aren”t human) and referred to Barack Obama as a “lazy ass president” whom he hopes contracts mad cow disease by having sexual congress with cattle:

He dies before his trial and is buried in a cow pasture next to (Obama adviser) Valerie Jarret (sic), who died weeks prior, after being convicted of sedition and treason, when a Jihadi cell mate mistook her for being a nice person and decapitated her.

May God bless and keep this man.