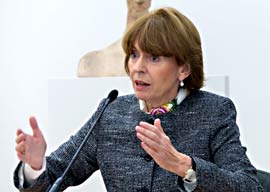 MAINE’S GOVERNOR COMPLAINS OF “D-MONEY” AND “SMOOTHIE” IMPREGNATING WHITE GIRLS
In what is easily and indisputably the most wonderfully insensitive comment by an American politician so far this year, Maine Governor Paul LePage claimed his state’s heroin epidemic was caused by young male gangster intruders from points south:

These are guys with the name D-Money, Smoothie, Shifty. These type of guys. They come from Connecticut and New York, they come up here, they sell their heroin, then they go back home. Incidentally, half the time they impregnate a young, white girl before they leave, which is a real sad thing because then we have another issue we’ve got to deal with down the road.

At press time, neither D-Money, Smoothie, nor Shifty could be reached for comment.

SPANIARD CLAIMS THAT “HISPANIC” AND “LATINO” ARE SLURS
Delfin Carbonell“let us now pause to praise men with funny names”was born in Europe and self-identifies as Spanish. He’s written a lot of books, but we’ve never read any of them. In fact, we never even heard of him until a few mintues ago.

He alleges that the terms “Hispanic” and “Latino” were concocted by the US Census Bureau to hide their sinister “evil-doings,” which we assume has something to do with white people. He compares the negative feelings these hateful terms induce in him to how Jews must have felt when those nefarious (yet well-dressed) Nazis forced them to wear yellow stars.

Mr. Carbonell did not, however, suggest an acceptable and non-problematic replacement for these terms, so we guess it’s back to “Spic.”

THE WRATH OF THE AWAKENED SAXON
An NBC News/Survey Monkey/Esquire poll”really, guys, that’s a bit complicated, please pick one name and stick with it”reveals that nearly three of every four white Americans gets angry at least once daily. White Americans self-report as far more angry than Latinos, who find themselves statistically more vexed than the blacks. Why white Americans may be so angry is anyone’s guess.