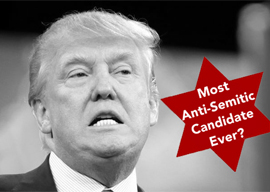 The Week’s Most Accidental, Occidental, and Detrimental Headlines

IS DONALD TRUMP A JEW-HATIN’, JEW-BAITIN’, ANTI-SEMITIC MONSTER?
Last weekend when Americans were enjoying their Independence Day festivities by eating watermelon and corn on the cob with family and friends, most of the rabidly and unapologetically anti-Trump media set off fireworks by accusing Donald Trump of using “anti-Semitic” imagery in a Tweet.

The image in question depicts a smiling Hillary Clinton hovering over a background of cash. To her right is a six-pointed maroon star in which are printed the words “The Most Corrupt Candidate Ever!”

The usual suspects began howling almost immediately that the star was, in fact, a Star of David and that this retweeted image was, well, um, accusing Hillary Clinton of being a Jew or something…no one really made clear exactly what sinister point they thought the image was trying to make, but of course this didn’t prevent them from going into a collective shvitz over it.

House Speaker Paul Ryan, who at least in theory is supposed to be on Trump’s side, tsk-tsked the presumptive GOP nominee and said that “anti-Semitic images” have “no place in a presidential campaign.” Philadelphia Rabbi David Teutsch said there was “no doubt” that the imagery was anti-Semitic and that such unabashed Jew-bashing serves to “remind us of darker times.”

“If you’ve been paying attention, you may have noticed that the media does not hold everyone to the same standards.”

For his part, Trump shrugged and said the dishonest media was making a mountain out of a “simple star,” adding that Disney included almost identical six-pointed stars on sticker books for its “Frozen” franchise, yet there was no kerfuffle about anti-Semitism. Jared Kushner, Trump’s extraordinarily Jewish son-in-law, penned an essay in the Observer“which he owns”pooh-poohing any notion that Trump hates Das Juden.

But the rest of the media wasn’t having it. Instead, they salivated over this smoking gun”or, rather, smoking oven”that proved once and for all that Trump is the New Hitler they’ve always insisted he is.

This is the same balanced and impartial media that fell almost completely silent over allegations in a new book that Hillary Clinton referred to a Jewish person as a “fucking Jew bastard” and a “stupid kike.” It’s the same media that has forgiven Jesse Jackson for referring to New York City as “Hymietown” and Al Sharpton for whipping up an anti-Jewish race riot in Brooklyn. If you’ve been paying attention, you may have noticed that the media does not hold everyone to the same standards.

A SHOOT-‘EM-UP CHICAGO HOLIDAY WEEKEND
The Fourth of July weekend saw at least 66 people shot in Chicago”one more than last year. Chicago Police Department Superintendent Eddie Johnson said “This is another example of the fact that we have too many guns on the streets of Chicago and too many people willing to use them.”

Interestingly, not a single shooting occurred north of Armitage Avenue. Chicago’s north side is predominantly white and also presumably well-armed. This would suggest to a rational mind that the problem has nothing to do with guns but rather the type of people who are willing to use them on the streets.

GET READY FOR A BLACK FEMALE “IRON MAN”
Because a black Hispanic Spider-Man, a female Thor, and a Lady Muslim superhero apparently hasn’t sated the bloodlust of the increasingly demanding Lords of Diversity, Marvel Comics is now handing Iron Man’s suit from a white man to a black woman, even though they’re still not sure what to call her. Taking the baton from former Iron Man Tony Stark is Riri Williams, who, like all black women, is a 15-year-old science genius who attends MIT. Iron Man writer Michael Bendis“who also can be blamed for the black Hispanic Spider-Man”scoffs at those old white holdouts who are “paranoid about us ruining their childhood” and who don’t display “the most progressive thinking.”

LATINO GANG ACCUSED OF FIREBOMBING BLACK RESIDENCES
Racially motivated brown-on-black violence gets little play among US reporters brainwashed into believing that whites have been, are, and always will be the only possible perpetrators of racial violence on the planet.

That’s probably why you haven’t heard that the Justice Department recently indicted seven members of the all-Mexican Big Hazard gang for allegedly firebombing several black residences in Boyle Heights, CA “in a bid to push blacks out.” You would have heard about it if it was whites bombing blacks. Or whites bombing Mexicans. But since it was nonwhites bombing nonwhites, this spectacularly violent story has been softly buried. Again, the modern mainstream press seems just a trifle unfair, doesn’t it?