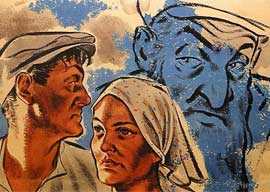 The Week’s Most Vile, Mercantile, and Senile Headlines

((((COMBATING ANTI-SEMITISM ONLINE)))
The Anti-Defamation League is a wonderful and righteous organization that stands ever vigilant against the merest suggestion that Jewish people”who, in case you weren’t aware were handpicked by God as the best people of ‘em all”could ever behave unethically. The ADL snoops for, hunts down, and roots out anti-Semites to deliver a stern yet eminently sensible message: Intolerance of Jews will not be tolerated. If you even think of defaming Jews, you will be defamed as an anti-Semite, rendered homeless, and forced to dumpster-dive for every meal for the rest of your miserable Jew-defaming life.

Recently the ADL became aware of a nefarious and sinister online plot to call the public’s attention to the fact that many people in media and academia just so happen to be descended from Abraham, Isaac, Jacob, and Shlomo. This diabolical and clearly unacceptable scheme involves the placement of three parentheses around the names of anyone thought to be Jewish.

This sick and evil practice allegedly started on a Hate Site called the Daily Shoah, whose podcast would include an “echo” sound effect whenever a Jew was named. The print version of this involves surrounding a person’s name in triple parentheses, which are known as “echoes.” For example, Mel Gibson would not receive the echo treatment, but (((Woody Allen))) would. One anti-Semite referred to the echo brackets as “closed captioning for the Jew blind.”

But now, thank GOD, the ADL has officially included the triple parentheses in their database as an example of “hate speech.”

According to the severely Jewish ADL CEO Jonathan Greenblatt:

The echo symbol is the online equivalent of tagging a building with anti-Semitic graffiti or taunting someone verbally. We at ADL take this manifestation of online hate seriously, and that’s why we’re adding this symbol to our database and working with our partners in the tech industry to investigate this phenomenon more deeply.

What’s impressive and inspirational about this is that despite the fact that Jews are an oppressed people living under a white supremacist oligarchy, they are still able to persuade tech giants to go easy on Jews. Google was recently persuaded to remove a Chrome app called the “Coincidence Detector” from its store. Operating from a database of surnames perceived to be Jewish, the Coincidence Detector was able to take any online document and then reload the page with the echo symbols placed around the relevant names.

“What would be more truly and meaningfully diverse than hordes of people from different countries, races, and religions all beating the snot out of one another?”

The lesson is clear, but perhaps not so clear that it doesn’t need to be repeated: Pointing out that there is a disproportionately high quotient of Jewish people in media and academia”so comically high, it almost seems mathematically impossible to achieve without some level of collusion”is not factual, it is hate speech designed to defame Jews.

CHURCH: ALL WHITES ARE RACIST, “NO MATTER WHAT”
Formed in the late 1950s, the United Church of Christ boasts a million members in the United States.

Nearly sixty years later, the UCC seems to have ditched Christianity in favor of Cultural Marxism while retaining the veneer of Christianity.

The group’s Facebook page is one uninterrupted stream of rainbow vomit. There are posts about rape culture, Islamophobia, “the sin of slavery,” and gay interfaith love.

Because the core of Christianity’s mission is to make white people feel bad about themselves, the UCC recently posted a listicle called “10 Ways You Can Actively Reject Your White Privilege.” These include “Take up minimal space during anti-racism dialogues and protests,” “Listen when people call you on your microaggressions,” and “Recognize that you’re still racist. No matter what.”

Apparently Christ’s crucifixion paid for all sins except the sin of being born white.

CANADA LEGALIZES NON-PENETRATIVE BESTIALITY
Rest easy, ye Canadians who enjoy heavy petting with your pets”it is now legal to have sex with animals so long as you don’t penetrate them.

A criminal case in British Columbia involved a man who was convicted of 13 counts of sexually assaulting his stepdaughters. This included one incident where the man smeared peanut butter on his stepdaughter’s genitals and filmed the family dog licking it off.

According to animal activist Camille Labchuk:

As of today, Canadian law gives animal abusers license to use animals for their own sexual gratification. This is completely unacceptable, contrary to societal expectations, and cannot be allowed to continue…. all forms of sexual activity between a person and an animal are unacceptable.

In case you were wondering whether non-penetrative sex acts between humans and animals is acceptable, it’s not”she said it twice.

AMBULATORY HETEROSEXUAL WHITE MEN BANNED FROM EQUALITY CONFERENCE
If you’re a straight, able-bodied white man seeking to lecture Englanders about equality, you are shit out of luck, my friend. The University and College Union’s equality conference has created four “safe spaces” in which oppressed would-be lecturers can snuggle: one for women, one for LGBTs, one for nonwhites, and one for the disabled.” If you suffer from any of these four conditions, you are said to possess a “protected characteristic.” By inference, all fully functioning straight white males should consider themselves “unprotected.”