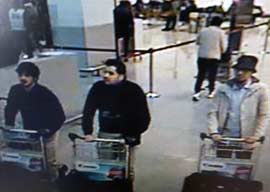 The Week’s Most Inscrutable, Unsuitable, and Irrefutable Headlines

THE ONLY THING WE HAVE TO FEAR IS ISLAMOPHOBIA
The deadliest terrorist attacks in Belgian history occurred last Tuesday morning in Brussels”the home of the European Parliament and a city that is fully one-quarter Muslim”as two nail bombs exploded at the city’s airport and one at a major train station. At last count, the explosions killed thirty-four people and injured 330 others.

Three days later, the aggressively white-hating white people at Salon.com were warning the world that the “cancerous racism” known as “Islamophobia” is “even more dangerous than you think,” even though, to be honest, we didn’t think that Islam was a race and neither did we think Islamophobia was nearly as dangerous as Islam.

Salon’s blaming-the-victims narrative echoes the insane, parallel-universe rhetoric of US Attorney General Loretta Lynch, who in the direct wake of a jihadist mass shooting in San Bernardino that killed 14 Americans, saw fit to warn the nation that she would actively prosecute those who engaged in “anti-Muslim rhetoric.”

For their part, Belgian authorities are monitoring the sudden rise in membership of the Belgian nationalist group Voorpost, described by the Daily Mail as a “White Power” group and a “right-wing extremist” group and a “skinhead” group rather than a group of Belgians with a healthy survival instinct who realize that not only don’t their representatives represent them, they represent their extinction.

People are waking up as there are more attacks. People are starting to feel that Muslims are winning the war in Europe and it is a risky situation….We tried to protest in Brussels but we were banned. Any criticism of the Belgian government is smashed down, and that is just making people angrier.

“An anti-terrorist ‘March Against Fear’ that had been scheduled for today in Brussels has been canceled ‘because of security fears.’”

Meanwhile, an anti-terrorist “March Against Fear” that had been scheduled for today in Brussels has been canceled “because of security fears.”

BOOGER-EATING EVANGELICAL PRESIDENTIAL CANDIDATE ACCUSED OF PHILANDERING
From the National Enquirer“a tabloid that ran stories which successfully destroyed the presidential aspirations of John Edwards and Gary Hart”comes shocking allegations that four women other than Ted Cruz’s wife were willing to have sex with the oily Grandpa Munster lookalike. (An unnamed fifth woman was allegedly paid to have sex with him, which is at least comprehensible.)

Cruz”the only known presidential candidate in American history who ate his own booger during a live televised debate”is accused by the Enquirer of having bedded a “FOXY POLITICAL CONSULTANT,” a “PRETTY LAWYER,” a “HOT BABE,” a “SEXY AUSTIN SCHOOLTEACHER,” and a “$1,000 A NIGHT CALL GIRL” all while married to his wife Heidi, a former member of both the Council of Foreign Relations and former employee of Goldman Sachs, facts which tend to undercut Cruz’s claims of being an anti-establishment outsider.

The allegations, if true, would also severely undermine Cruz’s carefully sculpted public persona of being a rabid evangelical who has done everything short of publicly handling serpents to prove his intensely abiding faith in his Lord and Savior Jesus Christ.

Earlier last week Cruz called Donald Trump a “sniveling coward” and accused him of being scared of strong women after Trump threatened to “spill the beans” about Heidi Cruz. Trump has yet to spill said beans, and it’s unclear whether he was referring to Heidi’s aforementioned insider connections or an incident where Heidi ran out of their house and was found by police on a roadside in a near-fetal position and thought to be suicidal.

After the Enquirer story broke, Cruz blamed the Trump campaign for planting it and inexplicably claimed that he had no desire to copulate with Donald Trump.

The Enquirer denied Cruz’s allegations as it updated the number of his alleged mistresses from five to eight. And the Daily Beast ran a story suggesting that it was allies of the now-defunct Marco Rubio campaign who’d been shopping around rumors of Cruz’s indiscretions for months but were unable to find any takers, including Breitbart.com, which until very recently was edited by the wormy, diminutive Ben Shapiro, an avid Cruz supporter and rabid Trump-hater.

But the fact is that the Enquirer wasn’t the first to go public with these allegations. On March 11, website The Political Insider ran a story claiming that a “Ted Cruz SEX SCANDAL Appears To Be Looming.” On March 15, a YouTube video purporting to be produced by representatives of “hacktivist” group Anonymous demanded that Cruz immediately suspend his campaign or they would release details about his alleged dalliances with prostitutes:

Have you heard of the expression “candy wrappers”? Do you recall visiting prostitutes? Mr. Cruz, we are now demanding you exit this race immediately or Anonymous will release all of the information that we have found…Your so-called underground acts that you think were done in the dark, will be brought out for all the public to see. It will be sent to every media outlet to publicize your disgusting behavior. We assure you it will go viral on every social media platforms in a matter of minutes.

Although the Enquirer story did not name any of Cruz’s alleged mistresses, three women have been publicly identified. One is former Cruz spokeswoman Amanda Carter, who allegedly has been videotaped leaving restaurants and hotels with Cruz, has denied the allegation. Another is former Cruz consultant and current Trump spokeswoman Katrina Pierson, who also denied being sexually involved with the self-proclaimed political outsider and Man of God. The third woman, Sarah Isgur Flores, is the former campaign manager for Carly Fiorina, whose Super-PAC received $500,000 from a Cruz Super-PAC in what some are suggesting was hush money. And the alleged prostitute embroiled in the scandal reportedly told a police detective that Cruz would alternately ask her to dress like a Catholic schoolgirl and a judge during their sexual roleplaying.

If the scandal worsens, we may have witnessed Ted Cruz eating his last booger on the national stage.