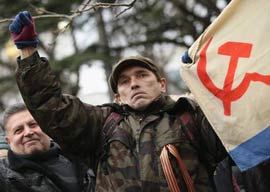 The Week’s Most Defamatory, Declamatory, and Derogatory Headlines

PUTIN PULLS A POWER MOVE
Fasten your seat belts and take your heart pills, because we may be on the brink of World War III.

Late last week, “men in military uniform without national insignia” were spotted at an airport in the Crimean capital city of Simferopol. There were reports of “Russian anti-submarine warships” seen off the Crimean coast. There were also rumors that the Night Wolves, a pro-Putin nationalist biker gang reputed to be Russia’s largest motorcycle club, had swarmed into Crimea offering assistance to pro-Russian factions.

On Friday, Barack Obama delivered a somewhat stern and incredibly vague speech claiming that he was “deeply concerned” about the sudden developments. He warned Russia that “there will be costs for any military intervention in Ukraine.”

On Saturday, Vladimir Putin blithely stepped on Obama’s deep concerns and requested permission from Russia’s parliament to deploy troops in Ukraine. Permission was granted by a unanimous vote. Obama and Putin then reportedly spoke on the telephone for 90 minutes, with Obama again expressing deep concern and Putin explaining that Russia had every right to protect ethnic Russians in Crimea.

“Fasten your seat belts and take your heart pills, because we may be on the brink of World War III.”

French, German, English, EU, and Australian officials joined Obama in their condemnation of Putin’s actions, whereas it’s likely that “The Poot” was shrugging off their condemnation because he was too busy driving race cars and shooting darts at whales.

Ukrainian officials lectured Putin that any Russian military invasion would be an act of war, which is cheeky considering the degree to which Russia outguns them. Clearly, if they hope to take on the Big Bear, they will need Western assistance.

Although Ukraine is obviously a geopolitical pawn in the struggle between Western powers and Putin’s proposed Eurasian Union, news coverage mostly ignored the fact that with its current boundaries, Ukraine is hardly a nation in the ethno-linguistic sense. Western Ukraine tends to be ethnically and linguistically Ukrainian, while the east leans toward Russia. So what on the macro scale may be a global war is, within Ukrainian boundaries, a possibly emergent ethnic war.

“We are simply different people from those living in the East,” said a woman living in the western Ukrainian city of Lviv according to an AP report. “We have a different history. Maybe it is better that we separate once and for all.”

WHOSE BROTHER’S KEEPER YOU TALKIN’ ‘BOUT, WILLIS?
Last Thursday, President Barack Obama”who, though abandoned by his black father and raised almost exclusively by white relatives, tends to downplay or even negate his white half”unveiled a new campaign called “My Brother’s Keeper.”

The program would funnel hundreds of millions of dollars from businesses and foundations to specifically give a leg up to “young minority men.” By any sane definition, this would constitute discrimination against young white men.

“We’ve got to help you knock down some of the barriers that you experience,” Obama told a group of minority chilluns without specifying whether or not this involved the Knockout Game. His program is allegedly designed to “tackle the systemic problems facing young men of color.”

THE WRATH OF FARRAKHAN
Louis Farrakhan, fabled transphobia pioneer and current propagator of the doctrine that white people were created by an evil scientist named Yakub, delivered a speech before 18,000 colored people in Detroit demanding that blacks should have their own criminal-justice system. That proposal seems rational so long as they also get to have their own technology. He spoke against gay marriage and denied being an anti-Semite, adding that he specifically hates “evil” rather than Jews and that “Satan is in control of Hollywood.” Nation of Islam spokeswoman Ava Muhammad also encouraged racial segregation in America, noting that “planes are going to destroy every area that is not dominated by Islam.”

In 2007, Farrakhan said that when Barack Obama speaks, he is “absolutely the Messiah.” In 1995, Obama attended Farrakhan’s Million Man March on Washington.