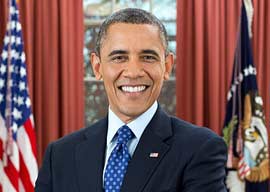 BARACK OBAMA RUBS AMERICA’s NOSE IN HIS BLACKNESS
As the final months wane in the presidency of our transformational and sparkling leader Barack Dindu Obama, our nation’s first caramel-colored president went to the historically black Howard University to deliver a commencement speech reassuring the mostly black student body that their main purpose in life is to be black, y’all:

First of all”and this should not be a problem for this group”be confident in your heritage. (Applause.) Be confident in your blackness. One of the great changes that’s occurred in our country since I was your age is the realization there’s no one way to be black. Take it from somebody who’s seen both sides of debate about whether I’m black enough…And because you”re a black person doing whatever it is that you’re doing, that makes it a black thing. Feel confident. Second, even as we each embrace our own beautiful, unique, and valid versions of our blackness, remember the tie that does bind us as African Americans….And I”m so proud of the new guard of black civil rights leaders who understand this. It’s thanks in large part to the activism of young people like many of you, from Black Twitter to Black Lives Matter….

The transcript of Obama’s speech finds 29 instances of the word “black” and seven of “white,” and then mostly to point out how much better whites have it than blacks. “Thousands filled with pride,” blared the Miami Herald headline about Obama’s bliggity-blackest speech ever. “President Obama offered up a rousing celebration of blackness Saturday,” chirped CBS News.

“Ever since our Neanderthal ancestors wandered out of the caves, white people have never been more confused than they are right now.”

On Twitter, the never-ceases-to-remind-you-he’s-black Jamelle Bouie
referred to Obama’s oratory as “a great mediation [sic] on democracy AND a celebration of black life.” After basking in the warm, musky, salty sweat of Obama’s speech, Melissa Harris-Perry”a black expert on blackness who likes to wear tampons on her ears“declared Obama to be “our most black, feminist president to date.”

FACEBOOK ACCUSED OF CENSORING CONSERVATIVE-LEANING NEWS
Social-media megalodon Facebook”which causes cancer and will kill off half of humanity within the next ten years”was accused last week of filtering out stories from its trending newsfeed that might support a conservative narrative. Speaking anonymously to Gizmodo, a former Facebook worker said that the tech giant’s newsroom practices “had a chilling effect on conservative news.” He said curators would routinely screen out stories dealing with Lois Lerner’s alleged IRS persecution of conservative groups, the CPAC gathering, Wisconsin Governor Scott Walker, and former Fox News contributor Steven Crowder. He also claimed that Facebook would routinely block links from the Drudge Report, no matter how strongly they were spiking on Facebook’s analytics.

Facebook CEO Mark Zuckerberg”who recently denounced “fearful voices calling for building walls””said he was launching an investigation into the allegations. He claimed that if the ideological muting had happened, it was not Facebook’s policy:

Facebook stands for giving everyone a voice. We believe the world is better when people from different backgrounds and with different ideas all have the power to share their thoughts and experiences.

Of course! That must be why Zuckerberg is working with Angela Merkel and other EU bigwigs to silence native Europeans from making a peep about the continent’s mass invasion.

GEORGE ZIMMERMAN AUCTIONS GUN HE USED TO KILL TRAYVON MARTIN
Smilin’ George Zimmerman is known across the globe as the World’s Most Famous White Hispanic. But he also has a darker side”others know him as the man who shot misunderstood Florida teen Trayvon Martin dead after the latter began bashing Zimmerman’s head into the concrete.

Zim’s most recent super-classy headline-grabber was an online auction of the gun he used to kill Trayvon Martin. He set a starting bid of $5,000 for what he termed an “American Firearm Icon.” He promised to donate the proceeds to fight Black Lives Matter due to their “violence against Law Enforcement officers.” As we go to press the auction had been yanked from one website and was placed on another after a troll calling himself “Racist McShootFace” placed a $65 million bid.

“How could you possibly try to make money off of killing of their child?” asked Trayvon Martin family lawyer Benjamin Crump. One could ask Crump the same question. Or even Trayvon’s mom, who trademarked her son’s name.