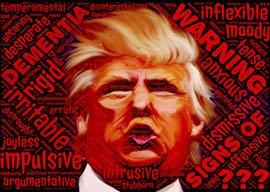 The Week’s Most Glorious, Meritorious, and Victorious Headlines

Donald Trump will be the 45th President of the United States. We won”t even bother to pretend there was any other news this week. There may have been other news”we simply didn”t notice.

Although we are pleased as punch with the results, others were not quite so happy. There were scores of assassination threats on Twitter, and people in West Coast crybaby states such as California and Oregon are now launching petitions to secede from the Union.

Today we will cover the insane and often violent reaction to his election by the usual crew of disgruntled, psychotic, medicated, pampered crybabies whose endless “street protests” during the Obama years are likely one of the main reasons Trump was elected. They rioted for eight years while they were winning, and now they are rioting because they lost. Even though they obviously love to riot, we suspect that they”d flee like mice from a counter-riot.

VIOLENCE AGAINST TRUMP SUPPORTERS
Outside Trump Tower in Manhattan, an extremely fat black female “anti-bullying ambassador“ named Shara McLaurin was arrested on Thursday for allegedly shoving a 74-year-old white male Trump supporter to the ground. The victim fell and hit his head on the sidewalk. McLaurin’s lawyer”also a black female”claims that the man had verbally harassed her client, who warned him she would “fuck him up” if he didn”t stop. He apparently didn”t stop, so she fucked him up. McLaurin, a member of Black Lives Matter, grinned through her court appearance and claimed that the assault was provoked when the victim called her a nigger.

“Donald Trump will be the 45th President of the United States. We won”t even bother to pretend there was any other news this week.”

Cellphone video shows an attack at a high school in Woodside, CA, in which sophomore Jade Armenio was left with scratches, bruises, and a bloody nose. According to the teen victim:

A video from Chicago shows two young black males repeatedly punching and kicking a 49-year-old white male who got in a fender-bender with his assailants. According to victim David Wilcox, “I stopped and parked. And I asked if they had insurance, and the next thing that I knew they were beating the shit out of me.”

Wilcox said that he actually did vote for Trump but his attackers didn”t bother to ask before beating him.

In Texas, an 11-year-old boy in a school that is only five percent white was reportedly attacked by students after he admitted he voted for Trump in the school’s mock election. The attack left him on crutches.

In the interest of fairness, we will also note that a Muslim woman in Louisiana was viciously set upon by two white males, one of whom was wearing a Trump hat, who stole her wallet and hijab while hurling racial epithets at her. Oh, wait”she made it all up.

Not your president? Well, then, don”t let the wall hit you in the ass on your way out.

In Oakland”where people riot when a white cop so much as dares to fart”an estimated 6,000 “protesters” set several fires and tossed bottles at police. Buildings were defaced with graffiti that read FUCK TRUMP and KILL TRUMP.

In New Orleans, Lee Circle was sprayed with graffiti such as BLACK POWER, DISMANTLE WHITE SUPREMACY, NO TRUMP NO KKK, and DIE WHITES DIE.

In the eternally clueless town of Portland, OR, anarchists rioted for four straight nights, smashing property, throwing rocks at police, and stopping traffic. In a hilarious twist of irony in this mostly white and overwhelmingly CultMarx town, a white protestor who tried impeding the progress of a carful of people wound up getting shot by one of the car’s black inhabitants.