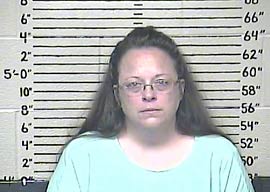 The Week’s Most Abrasive, Persuasive, and Invasive Headlines

LETTER FROM A KENTUCKY JAIL
Kim Davis is the aggressively homely county clerk of Rowan, Kentucky who is currently in jail for refusing to issue any marriage licenses”gay or straight”since the US Supreme Court declared in June that rump-wranglers and clam-diggers have the same right to marry as any normal, healthy, well-adjusted heterosexual couple whose sexual activities don’t leave poop smeared all over the sheets.

Because she was jailed over a matter of conscience”namely, that it’s impossible to be a Christian while facilitating a practice that the biblical God is clearly not cool with“she has achieved somewhat of a martyr status.

The once-popular maxim “live and let live” is but a dim remnant of a dead and distant past. In the winner-take-all, zero-sum war being waged between Christians and The Gays, The Gays are winning, as evidenced by the fact that a Christian is now in jail merely for acting like a Christian. Hmm”where has that happened before? Oh, yeah”in those spirit-crushing slaughterhouses known as communist countries.

Gay activists and every fag hag from here to Timbuktu are gleefully celebrating Davis’s incarceration. Christians are depicting her as a political prisoner, an anti-gay MLK. Her lawyer has likened her current tribulations to those of Jews living in Germany during the 1930s. (Readers will note that it took until the fourth paragraph this week before we mentioned Jews.) Former Arkansas Governor Mike Huckabee, who appears to be getting really fat again, said that Davis’s arrest and detention are evidence of a culture in which Christianity is becoming increasingly demonized.

Since Kentucky’s Legislature does not have to reconvene until January, Davis may rot in jail throughout the holiday season, during which time it may be prudent for her to consult with a personal stylist.

“The once-popular maxim ‘live and let live’ is but a dim remnant of a dead and distant past.”

JESUS CHRIST ACCUSED OF RACISM
Not only is the folk religion of modern progressivism at war with Christianity, it is also eating Christianity away from the inside. For evidence of this, look no further than this essay by Episcopal priest David R. Henson. He cites a passage in the Gospel of Mark where Jesus appears to imply that a Syrian woman and her daughter are dogs, which Henson alleges was a common anti-Syrian slur of the era. He claims that

If Jesus is reading this, could he please slap the shit out of this guy?

BLACK LIVES MATTER, WHICH IS WHY WE NEED TO KILL ALL WHITES
As we’re all very well aware, the Black Lives Matter movement is the most important social-justice cause of our times, because it allows blacks to feel empowered by the comforting notion that all of their problems are caused by predatory white cops rather than high black crime rates and low IQ.

We are also all painfully aware that this is a peaceful movement. It was never intended by the billionaire psychopaths who funded it such as George Soros to cause civil breakdown in America. That’s why the major media won’t pay much attention to a recent YouTube video by a mullet-headed “black supremacist” who calls himself King Noble Black and declares that

It’s open season on killing white people and crackas….The #BlackLivesMatter movement isn”t enough….It’s not safe anymore to be white in America. Lurking behind any corner, there could be an angry black man ready to take your ass out.

Nor should whites be alarmed at this recent Tweet by an underprivileged and misguided black youth in Maryland:

I’m not gonna stand for this no. more. Tonight we purge! Kill all the white ppl in the town of La Plata #BlackLivesMatter

If you feel threatened or alarmed by such comments, your feelings are obviously coming from a place of unearned power and privilege, so knock it the heck off.

NEW SHOWERS AT AUSCHWITZ
Jews worldwide exploded in outrage and a chorus of aggrieved “oys” at the news that to fight the 100-degree heat, the tourist destination of Auschwitz ran some light-misting sprinklers outside the famed Nazi concentration camp. Jews who were visiting the site complained that it triggered memories of relatives who’d died in the Holocaust, which makes one wonder that if they didn’t want to think of the Holocaust, why were they visiting Auschwitz?