The Wisest Thing Anybody Ever Said 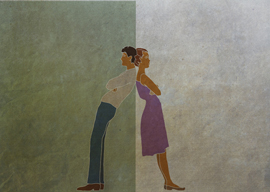 Whenever the Democrats whip up a feminist frenzy to win elections, as in 1992 and 2012, I”m reminded of a deflationary joke I”ve always seen attributed to a 1970s secretary of state. For example, premier gossip columnist Liz Smith wrote in 1988:

“”Nobody will ever win the battle of the sexes. There’s too much fraternizing with the enemy,” said Henry Kissinger.”

But I”ve often wondered: did Henry Kissinger really say that?

Well, I finally found out.

First, though, I suspect that deep down, Barack Obama will regret unleashing the feminist furies as much as anything he ever did to get reelected. Unlike in the 1990s when the absurdity of fighting on-the-job sexual harassment by sending Bill Clinton to the White House sank in relatively quickly, this decade’s spasm of righteous feminism seems likelier to stick around longer due to social media empowering humorless avengers. For example, last week a blogger at Scientific American was fired after not being wholly denunciatory of the late physicist Richard Feynman’s sex life.

Riling up racial and ethnic resentment for political gain is deplorable in a president, but different races can live apart from each other satisfactorily enough. The sexes, however, can”t. And the president and his minions fostering anger between the sexes for temporary electoral advantage is a grave sin against the general welfare.

“It turns out that married people are more happy and that happier people vote Republican more. Democrats can”t stand that, and Republicans can”t figure that out.”

Feminism appeals to the least feminine and the most angry. As feminist founding mother Betty Friedan repeatedly warned from 1966-1977, organized feminism quickly turns into a lesbian front. Giving presidential sanction to the unhappy spreading their emotions to the vulnerable is a disgrace.

And Obama likely knows that.

Has any president in recent decades appeared less persuaded by feminist theory? I read closely his 1994 memoir Dreams from My Father: A Story of Race and Inheritance, and I can recall him dedicating only part of a single sentence to feminist rhetoric.

He’s not a man who has even shown much interest in the women who loved him and supported him. He resented his mother following her career in anthropology, hurting her badly in her dying years by naming his book after the deadbeat father he barely knew. And, judging from his writing, he much preferred his blowhard grandfather to his pioneering female executive grandmother.

Obama has never appeared impressed by the intelligence of his Harvard Law School graduate wife, encouraging her to give up her legal career and take less demanding political and diversity seat warmer jobs that she could drop in and out of between stints as a stay-at-home mom.

In the White House, Obama has been a guy’s guy, shooting hoops, playing golf, filling out his NCAA bracket, and only listening seriously to a single woman, Valerie Jarrett (and not because she’s a woman but because she comes from his unusual upper-middle-class international black background).

Being a black Democrat, Obama can get away with this behavior. But that also means that he knows when he chose to run the 2012 election on the supposed Republican war on women that he was full of it. Why did he relaunch the battle of the sexes when he knows that fraternizing with the enemy is the essence of life?

For the Democrats, human unhappiness is their trump card. They are the party that benefits from heterosexual loneliness, heartbreak, and discord: the party of dying alone.

The oft-trumpeted gender gap is trivial compared to the Democrats” marriage gap. According to the Reuters-Ipsos online panel of 40,000 voters immediately after the 2012 election, Obama did only four percentage points better among women than men, but he performed 21 points better among singles than among marrieds.

I”ve been talking about the marriage gap since the 2004 election but it’s still little understood how powerful an effect it represents. It’s not an artifact of something more fashionable to talk about, such as sex, race, or education.

For example, it’s not just single women who flocked to Obama in 2012. He fared better with single men by 19 points than he did among married men.

Even among white men the marriage gap is still over 14 points.

It turns out that married people are more happy and that happier people vote Republican more. Democrats can”t stand that, and Republicans can”t figure that out.

But did Henry Kissinger really say about the battle of the sexes, “There’s too much fraternizing with the enemy?”