The Year in Race 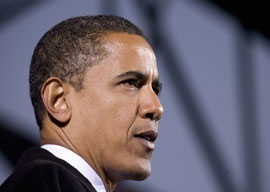 Look, it’s no fun being the designated race reporter at Taki’s Mag. When I joined the contributor list I ticked “opera critic” as my preferred slot on the masthead. Then I got into one of those dumb spin-the-bottle games with Jim, Gavin, Kathy, and Mandolyna, lost four times in a row, and ended up assigned to the race beat as well as having to…well, never mind. Here I am, stuck with the darn race thing.

It’s depressing, I know. It depresses me. I am wholly at one with the occasional commenter who emits a sigh of longing to live in an overwhelmingly monoracial society where people talk about things that: (a) shed some positive light on human nature; and (b) are non-career-threatening.

Well, guy”it’s always a guy”there are the Faroe Islands: “The largest group of foreigners is Danes, comprising 5.8%, followed by Greenlanders, Icelanders, Norwegians and Poles.” Note, however, that Yellow Fever seems to be making inroads: “The town of Klaksvik (pop. 4,585) has 15 Asian women.” I’m fine with this, but you may not be.

“Innumeracy is one of the Seven Pillars of Race Denial.”

So I get to report the race-biz highlights for 2013. Dirty work, but someone has to do it. I swear that darn bottle was loaded.

Trend of the year. I’m pretty sure I detected a general rise in the level of hysteria about race, at least in the USA and UK. If you had told me”me!“that the needle on the hysteriometer could attain any higher reading than it registered in 2012, I would have scoffed.

Things just get crazier, though. As our opinion elites take ever more incoming fire from reality’s forward artillery emplacements, they retreat deeper into the race-denial bunker and deal more ferociously with suspected enemy agents. As witness…

Race goat of the year. It’s a crowded field, but Paula Deen gets the trophy. Never was the sheer cruel nastiness of the anti-racist crowd more clearly illustrated than by the spectacle of this silly but harmless old lady being publicly humiliated.

Race crime trend of the year. Walking While Nonblack, AKA the Knockout Game, AKA Polar Bear Hunting (though let’s spare a moment to remember Hoang Nguyen). Whence…

I have moved past it and I really have no hard feelings about what has happened. I see it as another reason to support our youth with activities and youth programs….

Race math fact of the year. Lame duck New York City Mayor Michael Bloomberg pointing out that while nine percent of NYPD stops in 2012 were of whites, only seven percent of the city’s murder suspects were white, ergo city cops were stopping and frisking too many whites.