The Year of the Truth Camps 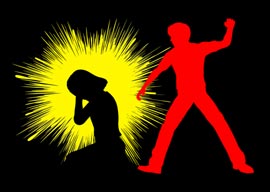 Welcome to 2015, the year that speaking and writing freely had to stop. Anything that might cause trauma to anyone of any race except the white one will be expunged, and the perpetrators of politically incorrect speech or written words will be airbrushed forever. “Trauma” derives from the Greek and means “wound.” The literary canon will be the first to bite the dust, as it’s one big trauma, especially for feminists.

The Great Gatsby, for example, is bonfire material because of a variety of scenes “that reference gory, abusive and misogynistic violence.” And let’s not forget The Adventures of Huckleberry Finn, as racist a book as there ever was, worse than Gone With The Wind. As Brendan O”Neill wrote in the Spectator‘s pages a few weeks ago, to British students free speech is so last century”but it’s worse in America, where colleges across the country are wrestling with student requests for what are known as trigger warnings.

These are explicit alerts that something inside the book they”re about to open and read might upset them. Poor dears. Reading books nowadays causes symptoms of post-traumatic stress disorder. For example, if a female character is described as homely, this can cause great trauma to homely women in Britain and America. Or if a dark-skinned man (I don”t dare call him black) commits a crime, heaven forbid, this too can cause great stress to criminals. So, the next time you buy a book, look for the trigger warning, and if you”re a drunk don”t buy any books that include characters who are lushes, and so on.

Triggers are relevant to sexual misconduct, but also include anything that causes women, short people, fat people, bald people, junkies, pedophiles, cross-dressers, people who stammer, and class-conscious social climbers to feel oppressed. Mind you, the only books that will not require trigger alerts are novels and nonfiction tomes dealing with privileged white Anglo-Saxon shits that lie in bed all day and torture dark-skinned folk for amusement at night.

And speaking of trauma, I was traumatized recently when I read an incredible story about a rape that took place inside a University of Virginia fraternity that once had offered me a bid to join it. I say incredible because I never believed a word of the tale of how seven Phi Kappa Psi students had raped a woman inside the frat house and had gotten away with it. The reason I didn”t believe a word was that the story first appeared in Rolling Stone, the magazine equivalent of Janet Cooke”the fabulist reporter whose yarn about an eight-year-old heroin addict won her a Pulitzer Prize until it emerged she had invented the whole thing.

Rolling Stone has ruined a lot of good people with hard to pin down stories over the years, but this one really did my old alma mater in. More to the point was the fact that at the university the honor system works and something as dishonorable as rape would never go unreported. The author of the hatchet job, Sabrina Rubin Erdely, did not name the victim nor the rapists, yet the university suspended all fraternity activities for the duration. It eventually emerged that she had made it all up, but the ladies I had gotten into an argument with over the integrity of my university refused to apologize to the poor little Greek boy, so I”m doubly traumatized. In the meantime, the networks were buzzing with left-wingers smacking their lips with glee at seven white men raping a female student and then going partying. It was the Duke University lacrosse rape all over again.