There’s No Such Thing As Scandinavian Airlines 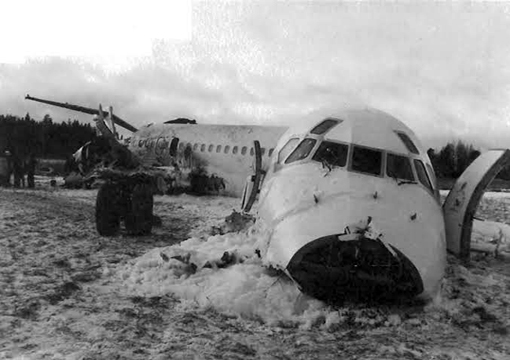 If you’re Scandinavian—or, more properly, if you consider yourself to be Scandinavian—then Scandinavian Airlines has made it their duty to inform you that you don’t exist.

Last Tuesday, in what was essentially a slap to the 21 million faces that inhabit Denmark, Norway, and Sweden, the air carrier foisted a nearly three-minute ad on the public called “What is truly Scandinavian?” Their answer was “nothing,” and it was delivered with genocidal iciness. Here is the commercial’s text in its entirety:

What is truly Scandinavian? Absolutely nothing. Nada. Niente. There’s no such thing. Everything is copied.

Our democracy? Credit goes to Greece. Parental leave? Thank you, Switzerland. The iconic Scandinavian windmills were actually invented in Persia. And we made the German bicycle a staple of our cities. Thank you, Germany! What about rye bread? It’s Turkish. Smørrebrød? Dutch. What about licorice? It’s Chinese. Midsommarstången? German.

And it gets worse.

Rumor has it the oh-so Swedish meatballs might not be as Swedish as you think, but Turkish. Even the Danish isn’t Danish. It’s Austrian. And the pride of Norway, the paper clip, was actually invented by an American. And while we’re at it…America, thank you for taking the first steps in empowering the women’s rights movement.

We’re no better than our Viking ancestors. We take everything we like on our trips abroad, adjust it a little bit, and voilà.

It’s a unique Scandinavian thing. Going out into the world inspires us to think big, even though we’re quite small. Because every time we go beyond our borders, we add color, innovation, progress, adding the best of everywhere to here. In a way Scandinavia was brought here piece by piece by everyday people who found the best of our home, away from home. We can’t wait to see what wonderful things you’ll bring home next.

When the narrator says there’s “no such thing” as Scandinavian identity, a small Nordic girl shrugs as if it’s no big deal and you need to get over it. And when “our Viking ancestors” are mentioned, it’s a big-toothed black male mentioning them. Other segments show phenotypically Scandinavian women appearing grim and even despondent over the idea that they don’t have a culture or identity to call their own.

“If you’re Scandinavian—or, more properly, if you consider yourself to be Scandinavian—then Scandinavian Airlines has made it their duty to inform you that you don’t exist.”

The ad would lead one to believe that the Turks and Chinese—and even the dreaded Germans!—have cultures of their own and are something more than serial cultural pilferers like those empty and nonexistent Scandinavians.

Thomas Hylland Eriksen is an Oslo-based anthropologist, and if you know anything about the cult of personality that surrounded Franz Boas, you’d realize that “anthropologist” is simply another way of saying “Cultural Marxist.” His stated aim was to “deconstruct the majority…and do it thoroughly, so that it can never be called the majority any longer.” Alexander Solzhenitsyn said that “ To destroy a people, you must first sever their roots.” This Scandinavian Airlines ad even recalls the admonition in Exodus to “break their altars, destroy their images, and cut down their groves.”

This is the same tired refrain we’ve heard for generations now about how there is no such thing as white European culture. The same people, apparently born oblivious, will insist that there is a genuine and meaningful culture in, say, Papua New Guinea, even though that’s a place that has truly invented nothing beyond different ways to shove bones through your nose.

Beyond inventing the blow torch and the ball bearing and dynamite and the modern refrigerator and modern telecommunications, Danes and Swedes and Norsemen invented plenty, thank you very much, I’m not even sure why this is an issue—that is, unless someone’s attempting to distort history in the service of utterly demoralizing indigenous Scandinavians.

And what are these precious migrants bringing to Scandinavia besides livestreamed three-hour rapes of Swedish girls? Honest question. I don’t know the answer.

“Foreigners,” which in Scandinavia tends to mean “Muslim asylum-seekers,” account for a whoppingly disproportionate share of the rapin’ goin’ on in Denmark, Norway, and Sweden.

There are plenty of things the press won’t show you—such as what an indigenous Swedish girl looks like after four Somali rapists get done with her.

You won’t hear much about how a Norwegian daily newspaper changed a headline from “Foreigners over-represented in rape statistics” to “New sexual culture shapes attacks.” Or how the president of the Danish Free Press Society was convicted of “hate speech” merely for noticing that Muslims are overrepresented in rape statistics. Or how the Swedish press refers to Muslim rapists as “Swedes” even if they aren’t Swedish citizens. Or how the Swedish media will often color-adjust and pixelate a rapist’s face to make him appear whiter.

You won’t hear about how Swedish police issued parking tickets to the owners of cars that had been torched by Muslim rioters.

You won’t hear anything along the lines of what a friend in Norway told me back in 2011:

Many of my friends on both sides of the [political] fence have been beaten, robbed, raped, and are sitting back with the feeling that they don’t get a fair shake from the authorities in the aftermath….Many of them are acting tough in bigger gangs, anti-white racial slurs and threats are common, but the second the gang is white, they claim persecution and the usual whines before anyone has so much as raised a right arm….

You won’t hear about when Swedes desperately attempt to spread information about what’s going on, they are accused of disseminating “racist leaflets”:

All over the country, reports are pouring in that the police can no longer cope with preventing and investigating the crimes which strike the Swedish people….When our political leadership and police show more sympathy for murderers than for their victims, there are no longer any excuses to let it happen without protest.

Of course, it’s not “racist” to accuse Scandinavians of being Nowhere Men and Women. According to the current strictures, it’s somehow magically anti-racist to tell Scandinavians who are the descendants of people who’ve inhabited that part of the world for 12,000 years that every particle of what they call a “culture” is the result of either thievery or an unearned gift.

No, it’s “racist” merely to notice the double standard and borderline genocidal to say anything about it.

Do you understand? You don’t have to say anything negative about non-Scandinavians to be considered racist. You merely have to object to these howling blasphemies that are being lobbed against Scandinavians.

You won’t hear about how it might be a wee bit hateful for Nigerian-born rappers who now live in Sweden to openly call for white people to be shot and enslaved.

Neither will you hear much about a recent Danish meta-analysis that concluded there’s a “a significant negative relationship between neighborhood-level ethnic diversity and various forms of social trust.”

Instead, you’ll hear about the masochistic Norwegian male who says he feels guilty that his Somalian rapist was deported. That same man proudly proclaimed his shame: “I am a human being first, and not a Norwegian.”

The initial response to Scandinavian Airlines’ ad was overwhelmingly negative, with a dislikes-to-likes ratio of around 50 to one. Of course, this couldn’t possibly have been the public’s honest reaction. No, it was blamed on an orchestrated harassment campaign by racist trolls.

And even after saying there’s no such thing as being Scandinavian, the airline subsequently stated that they “are proud of our Scandinavian heritage.”

I believe that this sort of nonsensical radical egalitarianism—AKA “egalitotalitarianism”—is designed to induce insanity in both those who swallow such claptrap and those who are forced to listen to it.

Something tells me that the Vikings weren’t very good listeners. We could learn a lot from them.