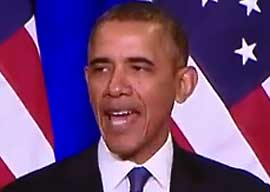 The Week’s Most Ruthless, Truthless, and Toothless Headlines

OBAMA: “WE ARE ALL JEWS”
Many Americans take President Barack Hussein Dolemite Obama at his word when he claims that he’s a Christian. Others accuse him of being a closet Muslim. But Obama shook the Judeo-Christian world to its roots last Wednesday with his shocking revelation during Holocaust Remembrance Day that “We are all indeed Jews.”

Speaking at the Israeli Embassy in Washington, DC, Obama told the assembled group of co-Jews:

Anti-Semitism is on the rise, we cannot deny it. When we see Jews leaving Europe…and attacks on Jewish centers from Mumbai to Kansas; when we see swastikas appear on college campuses, we must not stay silent. When any Jew anywhere is targeted, we must all respond as if we are all Jewish.

The fact that we are all Jewish tremendously complicates the rising problem of anti-Semitism.

Mr. Obama will further prove he’s Jewish by visiting a mosque in Baltimore this week like all good Jews are wont to do.

Since Holocaust Remembrance Day is the only day on the calendar when Americans are encouraged to remember the Holocaust, it came as a tremendous relief last week for people who fear that anti-Semitism is on the decline to hear that Anne Frank’s 86-year-old stepsister says that Republican presidential candidate and renowned chick-slayer Donald J. Trump reminds her of Adolf Hitler. “I think [Trump] is acting like another Hitler by inciting racism,” Eva Schloss wrote in a Newsweek opinion column.

Another Holocaust survivor”there sure were a lot of them”named Martin Weiss said, “I don’t want to make any comparison to Hitler” and then proceeded to compare Trump to Hitler without wasting a breath.

“The fact that we are all Jewish tremendously complicates the rising problem of anti-Semitism.”

No one in European countries dares to speak about the Holocaust. While it is not clear whether the core of this matter is a reality or not, even if it is a reality, it is not clear how it happened….Speaking about the Holocaust and expressing doubts about it is considered to be a great sin. If someone does this they stop, arrest, imprison, and sue him. This is while they claim to be supporters of freedom.

Obviously that man needs to be stopped, arrested, imprisoned, and sued for making such outlandish claims, because no truly free country would tolerate such intolerance.

SWEDEN RISING?
The fatal stabbing of a 22-year-old female Swedish asylum center worker by an alleged 15-year-old Somali refugee has thrown this once-docile and seemingly suicidal Scandinavian nation into a tizzy.

Twenty-two-year-old Alexandra Mezher was knifed to death at an asylum center allegedly reserved for refugees between the ages of 14 to 17, but according to her mother, she had often remarked that very few of these “children” seemed to be younger than 18 and more often were “big powerful guys” who appeared to be in their early 20s at least.

Sweden’s national police chief Dan Eliasson threw gasoline on the fire by appearing to be more concerned about the murder suspect’s emotional state than by the fact that a young Swedish girl had been murdered:

Who knows what horrors he has been through? Under what circumstances has he grown up? What is the trauma he carries? This entire immigration crisis shows how unfair life is in many parts of the world.

In response to such callous official disregard for native Swedes, a large group of “black clad masked men” distributed “racist leaflets” last Friday night at a Stockholm train station before launching a coordinated physical mob attack on the African and Middle Eastern “rapefugees” who cluster around the station harassing women and begging for change.

According to the “racist leaflets”:

All over the country, reports are pouring in that the police can no longer cope with preventing and investigating the crimes which strike the Swedish people….But we refuse to accept the repeated assaults and harassment against Swedish women. We refuse to accept the destruction of our once to safe society. When our political leadership and police show more sympathy for murderers than for their victims, there are no longer any excuses to let it happen without protest. Those who gathered today are neither your politician, your journalist or your policeman. We are your father, your brother, your husband, your colleague, your friend and your neighbor.

Apparently Sweden’s old Viking spirit may not have died after all and is now only awakening from a self-induced coma.