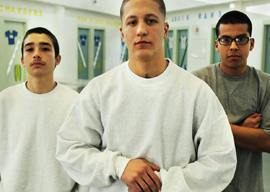 This week gossip blogs like CNN focused on a black stripper who was being harassed by her ex-fiancÃ©, Kim Kardashian’s brother. It was obviously a pathetic display of myopic minutiae, but it was also a telling look at our cultural priorities. Blac Chyna is the stripper in question, and she dumped Rob Kardashian when her baby was one month old. She dumped her previous baby-daddy when the kid was 1. That’s two babies without a daddy and no marriage in sight, but ABC News was focused on the “revenge porn” Rob dared to put on social media. Three-quarters of black kids are born out of wedlock. But hey, who cares about the kids or the institutions we used to hold dear? Let’s focus on this stupid slut’s privacy (link NSFW).

You see this same willful blindness in the PBS documentary They Call Us Monsters. Directed by Ben Lear (son of the guy who created Archie Bunker), the film tracks three teenagers accused of attempted murder and discusses the ethics of trying “youths” as adults. They completely ignore the Hispanic influence involved in all three cases and treat the boys like some random victims of their random environments. When I saw the movie, I couldn”t not see a world where marriage is trivialized and poor Hispanics prove again and again they are incompatible with American culture.

“Norman Lear created Archie Bunker as a way to lampoon the working class, but it backfired and we all learned to love ol” Arch.”

The first boy, Juan Gamez, came from El Salvador when he was a child. Back home his father expressed disdain for Juan because he thought the brother was a tougher kid. That kind of neglect may work in El Salvador. It’s not in a state of war; it is a war. Importing people from this country would be like plucking Crazy Horse from the Battle of the Rosebud and plonking him into the middle of Tokyo with a broom in his hand. Juan was determined to prove his worth to his father and this is typically done by showing you are a more ruthless warrior. Unfortunately, when it came time to prove his manhood, someone changed the scenery and they were now living in California. The father was back home and there was no battleground for Juan to prove himself on, but he couldn”t adapt so he followed the plan and joined a gang. He did well in “the game” and proved himself to be way more cold-blooded than his brother, but it didn”t matter. California isn”t looking for brutal killers, so when he shot a rival gang member in the head at point-blank range, he was arrested for murder. Juan’s story begins while he is awaiting sentencing and ends with him getting fifteen years, after which he will be sent back to El Salvador. I”m assuming this means he’s illegal, but the film doesn”t tell us because that’s not how the Lears operate.

Antonio Hernandez is the second kid we learn about in the film. He’s a likable Mexican drug addict who comes from a single mom who is little more than a professional baby machine. When Hernandez talks to the filmmakers at home, there are toddlers strewn all over the floor like some kind of tiny Jim Jones massacre. Some have pillows. Some have pants. One managed to get a diaper, but none of them have a bed to sleep on. It’s clear the mother just has food lying around and they crash when they”re tired. You know, like rats. Antonio never had a father and stabbed a rival gang member shortly after joining a gang because that’s what you”re supposed to do. They say drugs are the root of all crime in America, but I believe the idle hands that lead to drugs are just as bad, and idle hands come from no dad.

Being on trial and away from drugs gets Antonio clean and he sets his sights on military school. It’s not clear why, but the courts drop the charges if he pursues a career in the Army. It’s way too lenient for trying to kill someone, but what happens next is much more important and the film just glosses over it. Antonio finds himself incompatible with the other students in the school because they”re “squares” and he really hates having to wear a tie. He says he has nothing in common with them at all. Soon after, his mother and her Jim Jones brood move into his room and he hits the streets. By the end of the film, he is back on trial for drug-related charges. We never hear about the boy’s father or his mother’s inability to close her legs. We never hear about a culture where there is zero stigma in any of this. Normal Lear’s son is focused on “the system” and how it does nothing to help, even though we see the exact opposite right before our eyes.