This Week in Jewish Self-Harm 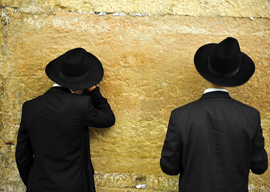 Somebody get the naltrexone; the Jews are cutting again. Jews have a baffling tendency to resort to self-harm during times of crisis. Mind you, all professional victim groups have a self-defeatist streak. Black kids demand affirmative action so they can attend prestigious universities, only to boycott classes and disrupt campus life because an English teacher used the word “niggardly,” or an administrator wrote an email defending Halloween costumes. But that type of self-destructiveness usually results in only small-scale harm. But with my own beloved Jews, maybe it’s because we tend to have a hand in the bigger things in life that our self-destructiveness often results in larger-scale harm.

In the eschatology of the preterist left, we are in postmillennial times. The Antichrist doesn”t lie ahead of us. He’s already here, and he tweets incessantly from the Oval Office. This “end-time” view of America, held by traumatized leftists of all stripes, has taken a particularly strong hold on the minds of American Jews. And it’s making “em go a bit wacky. We”re only two months into the Trump administration, and it seems like not a week goes by without some large-scale example of Jewish self-harm.

But before we get to last week, let me provide a little history. After all, I”m a history guy.

“Now we have the internet’s No. 1 purveyor of denial admitting he was dead wrong, and has even one mainstream Jewish journalist or leader written about it in the press?”

In the 1970s, the rise of Holocaust-related books, TV shows, and movies brought a concomitant wave of Holocaust revisionism (and denial, although that term wasn”t used back then), with the 1978 birth of the Institute for Historical Review (the first Holocaust revisionist publishing house in North America). Initially, Jews in Hollywood (and yes, there are a few) attempted to battle this scourge using their most powerful weapon: Jack Klugman as Quincy the coroner. When that failed to halt the spread of revisionism, Jewish advocacy groups decided to use the law as a weapon. In every Western nation in which freedom of speech is not an inviolable right, Jewish advocates lobbied for the prosecution of Holocaust revisionists.

This was supposed to be a wise-as-Maimonides strategy. And how did it turn out? In France, the prosecution of two-bit denier Robert Faurisson resulted in hundreds of French intellectuals weighing in in his defense. And it wasn”t only French intellectuals. None other than Noam Chomsky (back in the days when his name carried a great deal of weight) made defending Faurisson a cause cÃ©lÃ¨bre. Faurisson was fined and imprisoned, sure. But he became an international figure, as opposed to the unknown crank he”d have remained had he not been given worldwide publicity due to his prosecution.

That’s some nice Maimonidizing there, Jews.

In Canada, Ernst Zundel, a Hitler-loving pamphleteering nonentity, was put on trial twice for being a revisionist, and both times, due to Canada’s half-hearted fascism (you can put authors on trial, but darnit there are no restrictions aboot how they can conduct their defense), Zundel’s lawyer was able to grill some of the world’s most renowned Holocaust historians and survivors. And the results were disastrous, with Canada’s largest newspapers carrying headlines like “Expert’s Admission: Some Gas Death “Facts” Nonsense,” “Survivor Never Saw Actual Gassings,” and “No Scientific Proof Jews Exterminated.”

Arguably, nothing spread denial more in the 1980s than the attempts to silence it.

So here we are in Trump’s post-end-time hell on earth. And two weeks ago, Devil Trump decided to make an insane (but, you know, totally correct) assertion that some of the bomb threats against Jewish community centers might be hoaxes. Jewish leaders and “intellectuals” were beside themselves! Those JCC threats were proof of the “rising tide of anti-Semitism” brought about by Trump the Hitler. How dare #notmypresident suggest that the threats were possibly the work of a hoaxer. So these Jewish pooh-bahs decided that the best way to respond to Trump’s “crazy” (and again I might add, totally fucking true) claim that the JCC threats might be the work of a hoaxer was to deride Trump as a promoter of “false flag” conspiracy theories.

These days, “false flag” has a very specific meaning among conspiratologists. It’s shorthand for faked event, faked atrocity. Sandy Hook didn”t really happen. Obama built a phony school in a phony town, paid off a thousand “crisis actors” to pretend to be parents, teachers, and neighbors, and bribed every single member of the media and law enforcement to go along with the charade. There was no mass shooting at the Pulse nightclub. There were no victims, no bodies, no nightclub. It was all a stage show, produced so that “they” could manipulate the “sheeple.” “False flagism” is sheer lunacy, and I”ve never been shy about saying so in this column. And yet the Yeshiva kids at Haaretz and elsewhere thought it would be really, really effective to take Trump’s suggestion that the JCC threats might be a hoax, and claim that this means Trump is a “false flagger.” One can debate the frequency of hate-crime hoaxes (as I did last week with legal scholar David Schraub, who posted a rebuttal to my piece here), but the simple fact is, they happen. Conversely, there has yet to be a single proven example of a “false flag” crime in which a mass atrocity in the U.S. turned out to be a stage play involving actors and invisible puppeteers.

When Trump argued that the JCC threats might be a hoax, he was not suggesting something that fell outside the realm of the possible. But Trump claiming that the threats were a “false flag”? That’s an assertion only a madman would make. So, of course, prominent Jewish anti-Trumpers deceptively put the term “false flag” in quotes when describing Trump’s reaction to the threats, because that tied him to Sandy Hook and Pulse conspiracy nuts. And then Trump turned out to be right (in that the man arrested for at least eight of the JCC threats was a leftist hoaxer). As a result, actual anti-Semitic “false flaggots” claimed victory, because the takeaway from the episode (thanks to publications like Haaretz) was that Trump yelled “false flag,” and Trump was proven right. Therefore, “false flags” happen!

Jewish intellectuals tied Trump’s fairly reasonable skepticism to “false flagism” in an effort to discredit him. But because he turned out to be correct, all that resulted was a win for actual false-flag theorists, who can now put one in the victory column, not because Trump asserted that the JCC threats were a false flag, but because a bunch of shortsighted Jews claimed he did.