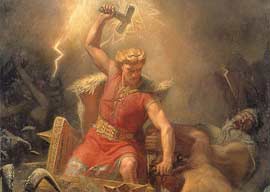 Last week was a trifecta for Cultural Marxism in the comic-book world. Archie Andrews was shot to death trying to protect a gay senator, Captain America became black, and the Mighty Thor had a sex change.

Archie Andrews, the freckle-faced, milkshake-drinking ginger who has epitomized American wholesomeness since 1941, was murdered last Wednesday in Life With Archie #36. His friend Kevin Keller, an openly gay white senator with a black husband, was campaigning for gun control and was being threatened by some stereotypically rendered right-wing gun nut. But Archie stepped in and “heroically” ate a bullet for him.

“Archie is not a superhero like all the rest of the comic book characters,” explained Jon Goldwater, co-CEO of Archie Comics. “He’s human. He’s a person. When you wound him, he bleeds. He knows that. If anything, I think his death is more impactful because of that.” (The company’s other co-CEO is Nancy Silberkleit, who has been sued for sexual harassment by reportedly referring to all male employees as “Penis” rather than their names. She denied such harassment was even possible since males are not a “protected class.” At press time, I could not verify whether she also uses tremendously annoying words such as “impactful.”)

I”ll bet you didn”t know that before he gave his life to save a gay senator, Archie also spawned an interracial baby with a black woman.

Marvel Comics announced last week that the role of Captain America”who, like Archie, has existed as a Caucasian since 1941″will be assumed by a black man from Harlem who until now has played a sidekick known as “The Falcon.” The original Captain America”the white one”is giving his role over to The Falcon because he is now 90 years old and too feeble to be a superhero anymore. All-New Captain America is slated to launch in October.

“In 2014, this should be a thing that we shrug off,” says Marvel executive editor Tom Brevoort about the new black Captain America. “It shouldn’t be seen as revolutionary, but it still feels exciting.”

So if it’s no big thing, why did you do it in the first place, and why does it feel “exciting” to you?

Marvel also announced last week that the Mighty Thor, who has existed as a muscular male thunder god in Nordic folklore for millennia and became a male comic-book hero in 1962, will transmogrify into a woman starting in October, since the male Thor has been deemed “unworthy” to wield his legendary hammer. “This is not She-Thor,” said series writer Jason Aaron. “This is not Lady Thor. This is not Thorita. This is THOR. This is the THOR of the Marvel Universe. But it’s unlike any Thor we’ve ever seen before.”

But last week’s three cases are hardly the first instances of PC injecting itself virus-like into the comic-book world in an attempt to mold impressionable young minds.