Thought Police on the Tennis Court 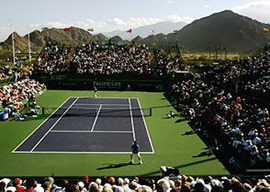 Here we go again, sports fans! During a recent tennis match between two professionals in Indian Wells, California, a racial comment uttered by one of the players has the usual suspects up in arms. The newspaper that only prints what fits PC, the dreadful Big Bagel Times, was among the first to complain.

Michael Llodra of France is usually a mild-tempered fellow, but in his winning match against Ernests Gulbis of Latvia, he seemed to be out of sorts. His problem was a Korean woman by the name of Alex Lee Barlow. The Korean-American was accompanied by her husband and brother, all of whom stood out by cheering loudly for the Latvian. Indian Wells is known for having stands very close to the courts”not necessarily a good thing for emotionally sensitive tennis fans. Tennis players are known for constantly using four-letter words.

“I wonder what would have happened if he had simply called her a hooker.”

When I was on the tennis circuit forty or so years ago, the worst offender was Bob Hewitt, a foul-mouthed Australian who won the Wimbledon doubles and mixed many a time. There were no fines back then, and players were supposed to act like gentlemen. Referees turned a deaf ear in Bob’s case because he suffered from a type of Tourette’s, although back then it was called bad manners. Players no longer act like gents, especially women such as the ghastly Serena Williams, who intimidates everything in her path and often often seems to go unpunished because she’s black.

Llodra’s grievous offense was to mouth the words “putain chinoise,” which translate as “Chinese whore,” after some excessive cheering against him by the Barlow group. He did not yell the words out, he muttered them at best, and he did, after all, express his feelings in French.

I”m against vulgarity in all its forms, but there are mitigating circumstances in this case. Koreans are monolingual at best, and the chances of a Korean-American speaking French are slim. Ilie Nastase, the great Romanian player of the 1970s, always swore his head off at umpires and linesmen”but he did it in Romanian. They knew that he was using foul language, but there was nothing they could do about it. Who speaks Romanian except for Romanians?