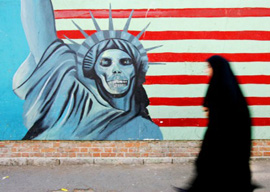 As I perused the program for the Philadelphia Society‘s national meeting in April, featuring wall-to-wall denunciations of “America and Her Detractors,” I wondered whether all anti-Americanism is the same. At one time there were communist sympathizers who adored the Soviets for whatever lunatic reasons and who opposed the US as an obstacle to Soviet expansion. There were also lefties with whom I spent my graduate-school days who imagined that communism was the best guarantee against fascism. This attitude now seems endemic to German journalists and intellectuals who still praise the East German communist regime for its anti-Nazism and who vote for the recycled commies in Germany’s Party of Democratic Socialists. These Germans are not notably anti-American so much as they are ostentatiously anti-German, and many of them support the Israeli right as an ongoing act of contrition for Nazi crimes against the Jews.

As far as I can tell, there are three principal sources of anti-Americanism, and the US government can mitigate their effects in varying degrees.

“America’s most intelligent critics stand on the true European right.”

The first is Islamic fundamentalism, which targets the Christian”and by now the post-Christian”West as its enemy. The Islamic fundamentalists will never accept us unless we convert, but it is possible to diminish their animus. We can stay outside their region politically and militarily, for example, by not stirring up revolutions or by not occupying Muslim countries with our armies. Our intervention in Iraq not only increased their animosity toward us, it resulted in the oppression and uprooting of the local Christian inhabitants. The neocon media whooping it up for “democratic revolution” in Egypt strengthened Muslim fundamentalists and led to persecution of the Christian minority. I”m not sure what we can do about the fact that Western Europeans have allowed, and sometimes encouraged, anti-Western Muslim populations to move into their space. But we can avoid complicating this mistake by carefully screening those who come into our country.

A second form of anti-Americanism has come from non-American multiculturalists who are upset that we haven”t all swallowed our own poisons. As I try to show in The Strange Death of Marxism, America generously bestowed our cultural industry on the Europeans. It is exceedingly hard for me to believe that Europe’s current fixation on feminism, gay rights, and open borders does not have an American provenance. The EU is about to introduce quotas for women on all corporate boards among member countries, perhaps testifying to the triumph of American feminist writers who are eagerly read and digested over there.