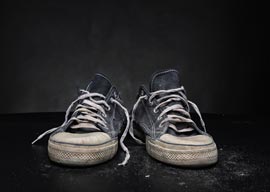 I hadn”t checked in on alternative music (or whatever they”re calling it these days) and was disappointed to discover the Thought Police have taken over there, too. Today’s rebels follow the same strict guidelines college campuses do and to stray from the path is to be banished from Outsider Village.

The good news is, the music’s improved. Whirr are a band from San Francisco that does an instrumental onslaught of intense rock that sounds like it should be the soundtrack to that rape movie Baise-moi. Another great new band, G.LO.S.S., is much easier to classify. They”re just modern punk with some art-rock hardcore tossed in and they”re way better than my generation’s equivalent. I realize this doesn”t pertain to you, but there are just as many coal-mine canaries in pop culture as there are in politics, and they affect us all. Nobody in America cares that Canada just elected Joey from Friends, for example, but they should because that shows us Bernie Sanders is no longer anything to scoff at.

“I may curse at them when I”m pushing my kid’s stroller down the street, but deep down I”m happy the asshole tradition of ignorant vandalism carries on.”

This week, Whirr’s label dropped them for making transphobic comments about G.L.O.S.S. The latter’s vocalist is an ugly dude with tits who must have at least some self-awareness if he calls himself a “girl.” He’s clearly insane, but I don”t have a problem with that when you”re talking about punk. In my day, we had a local band called Zen Slap and the singer would cry as he screamed his way through each song. He wore no shoes and had no friends and we loved him for it because weird music is better when it’s made by weird people. Whirr look like typical young kids who tell security guards to fuck off and smash beer bottles on the road. I may curse at them when I”m pushing my kid’s stroller down the street, but deep down I”m happy the asshole tradition of ignorant vandalism carries on. Whirr didn”t smash any bottles on G.L.O.S.S.’s van. They didn”t say, “May you burn in hell,” as the Rastafarian hardcore band Bad Brains did to gay hardcore band Big Boys. Skinheads didn”t show up at their show and kick the shit out of the audience the way they did when my band Anal Chinook opened for Millions of Damn Christians. The fans didn”t storm the beaches of Brighton and almost murder each other the way the mods did to the rockers in 1964.

Whirr were canned because their friend got on their Twitter account and accused G.L.O.S.S. of being “just a bunch of boys running around in panties making shitty music.” When fans warned them to watch their tweets, they said they weren”t scared of a bunch of “disowned sons.” Within minutes, Run For Cover Records (which also put out the bands “Pity Sex” and “Teen Suicide”) announced, “We as individuals and as a label are accepting of all people and require the same from the bands and people we work with. We will not be working with Whirr from this point on and do not support that behavior in anyway [sic]. We will post a full statement tomorrow.” The band’s previous label Graveface Records then added, without being asked, that they don”t like to work with “hateful people.” These are not major labels like EMI and they”re not distancing themselves from the first people to swear on television as EMI did with the Sex Pistols. These are indie labels that are supposed to be leading the bands mainstream society can”t handle.

That is the face of rebellion today: a skull that tells you how unhateful it is unprompted. It’s a band of guys in drag who call themselves girls and claim they live on the outskirts of society yet cannot be criticized. If your band doesn”t have the same opinion as Vanity Fair or whoever gave Caitlyn Jenner that bravery award, they”re done. Today’s rebels have to monitor their tweets and make sure they”re always politically correct. This matters because artists are supposed to be the outliers. The rebels, the anarchists, the misfits, and the outcasts are supposed to be the ones pushing the boundaries of censorship. Us old-timers are too tired to tear down the walls, but it often seems like we”re the only ones with any bravery left. The biggest rebel I know of isn”t in a punk band. He’s a geriatric Brit they call Derb who wears suspenders from Home Depot that make him look like a contractor for a children’s show. Today’s punk vocalists should cower at his feet.

I care about these two bands because it shows how ubiquitous the witch hunt has become. The anarchists and the communists have merged (note Mustafa’s “Violent Anarchists for Communism” shirt). Those who used to fight for as few rules as possible are now inundated with more rules than ever.

The Thought Police have won.