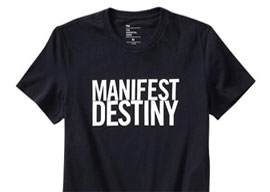 The price-gouging sweatshop-clothing chain The Gap is enduring a tempest in a T-shirt over a $30 “designer” tee featuring the words MANIFEST DESTINY. What is being described as a “huge outcry,” an “outrage,” and “a flood of complaints””but was little more than some mild wailing from change.org‘s Soros Zombies and predictable carping from professional-victim “Native Americans””led to The Gap withdrawing the offending item and apologizing for being insensitive to the never-ending torrent of Injun teardrops.

The shirt’s “designer,” Mark McNairy”it requires decades of training and an artist’s gilded soul to pick a font and peck out two words”initially responded to this manufactured controversy with what seemed like a defiant Tweet: “MANIFEST DESTINY. SURVIVAL OF THE FITTEST.” Then, acknowledging that Social Darwinism has been thoroughly discredited by those who always call things “discredited” without actually bothering to discredit them, McNairy bent over, grabbed his ankles, and apologized:

I AM SORRY FOR MY SURVIVAL OF THE FITTEST COMMENT. IT HURT ME DEEPLY TO BE CALLED A RACIST AS THAT IS NOT ME. I REACTED WITHOUT THINKING.

A writer in England, a country that has never colonized or oppressed anyone, clucked that The Gap’s decision to issue the T-shirt was “a historic mistake.” So was letting all those Muslims into your country. So was ever feeling the slightest twinge of guilt for having built one of the greatest empires the world has ever known.

Many professional ingrates described the words MANIFEST DESTINY in the most horrific terms, conjuring images of peaceful, daisy-sniffing “indigenous peoples” who were placidly blowing bubbles and rubbing one another’s feet until the Evil White Man came and ruthlessly murdered 100 trillion of them. One commenter noted that the T-shirt was “probably made out of cotton,” which ignores America’s shameful legacy of slavery and shows a “shocking lack of historical awareness.” Another opined that this incident “shows light into the true nature of the fashion industry, one riddled with racism.”

Never mind all the Che shirts and the Mao shirts and the IT’S A BLACK THANG shirts. Those are all on the right side of history, of a vibrantly righteous and inescapable future that is destined to occur and is constantly manifesting itself.

Modern globalists, multiculturalists, and one-worlders”the type of leisure-addled schmucks who scream until their throats bleed about MANIFEST DESTINY T-shirts”base their beliefs on “the great principle of human equality” and “human progress.” They “turn with moral horror” from “the oppressions, the cruelties, and injustice” of past eras. They stand “in defence of humanity, of the oppressed of all nations, of the rights of conscience, [and] the rights of personal enfranchisement.”

In short, they agree with all the quoted text from that last paragraph, which was taken from an essay by John L. O’Sullivan, who is often credited with coining the term “Manifest Destiny” in the mid-1800s as the USA spread westward.

Echoes of Manifest Destiny”of a higher moral pretext that allows one to feel a bit less guilty for seizing land”can also be found in concepts as diverse as Hitler’s Lebensraum, the Mexican reconquista movement, Islamic global jihad, and Zionism. It’s also a persistent subtext of America’s century-long quest to make “the world safe for democracy,” from Woodrow Wilson up to latter-day neocon foreign-policy shlubs.