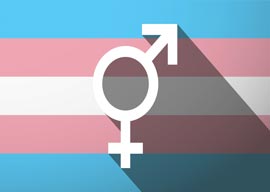 In the article that shut down my life, “Transphobia Is Perfectly Natural,” I likened sex-change surgery to self-mutilation. As the mob chased me through the village with their torches, I yelled back, “They have BIID!“ (body integrity identity disorder), referring to nutbars who have decided they don”t want their limbs. This sentiment was scoffed at and trampled underfoot but the logic is inescapable and so, 10 months later, here we are. The mob has picked up this idea, dusted it off, and proudly named it “transabled.” That’s right, correctly assigning your body the gender you feel it should be is the same as people who chop their legs off, and there’s nothing wrong with that. “Society needs to appreciate that…it isn”t beyond the pale to allow people to align their body with how they feel they ought to,” says Dr. Clive Baldwin about BIIDs. Alexandre Baril, an “academic” who looks like an intern at a tech start-up, is presenting their case at Ottawa University’s Congress of the Social Sciences and Humanities this week.

All right, we”ve conflated mutilating your body to become female with “One Hand Jason,” who severed his arm with a “very sharp power tool.” Can we acknowledge that “gender dysphoria” should remain firmly planted in the Diagnostic and Statistical Manual of Mental Disorders? Nope. “It’s mostly the medical profession who sees the sexes as either male or female,” says a “nullo“ named Gelding, as though the medical profession was the Flat Earth Society (careful clicking that link, by the way”he had his penis and balls removed). Despite all the evidence to the contrary, we”re still driving headlong into a world where the people who went to med school are quacks and the lunatics on the fringe of society are experts. And we”re fine with that. “Nice to meet you, @Caitlyn_Jenner,” tweets the most powerful person in the White House. “The brave choice to live as your authentic self is a powerful example to so many.”

“We”re still driving headlong into a world where the people who went to med school are quacks and the lunatics on the fringe of society are experts.”

In the Vanity Fair article on Bruce Jenner we”re told his children see the idea of dad chopping his penis off as a “non-issue.” As Anthony Cumia discussed this week on his show, “Bruce is rushing this for a reality show.” Jenner said he had an anxiety attack when he saw the first dose of plastic surgery. Poor bastard. He’s like Barcelona agreeing to host the Olympics and then having to frantically pretend their infrastructure can handle 2 million extra people overnight. Over at Townhall, Ben Shapiro likens all this glorification of mental illness to sadism. “Nothing would have been crueler,” he writes of his very crazy grandfather, “than had society told him that his delusions were correct”that the radio was, in fact, talking to him.” Post-op trannies have a suicide rate 20 times higher than us. Johns Hopkins no longer does the operation because they determined it violates the Hippocratic oath. The liberal retort to this is usually to blame the stigma surrounding the gender-disabled, but that doesn”t make sense. Today’s trannies are hailed as rock stars. Criticizing them gets you fired, yet their suicide rate is still off the charts. I talked to Shapiro about this and he pointed out that “the suicide rates among all transgenders is around one percent. That’s what it was for Jews during Nazi occupation.” I”m guessing being a Jew in 1942 Germany was a lot worse than being on the cover of Time. Post-op sex-change regretter Walt Heyer’s claim that 62.7 percent of transgenders have untreated mental disorders is a much more likely root cause. He’s been all over the news this week warning the cheerleaders that the “hangover“ is coming.

When “Leelah,” a 17-year-old gay kid, killed himself after not being allowed a sex change, it became a meme. “#RestInPower,” they tweeted. “Fix society. Please,” they posted. Dan Savage took up the cause and harassed the family with such intensity they couldn”t leave the house. That meant they had to move the funeral for their dead son to a secret location. None of these crusaders stopped to run the numbers, because if they did, they”d realize allowing gay teens to permanently dismember themselves would lead to a lot more suicides than not allowing them to do so.

This is what happens when you let the shrill minority run the show. They make it up as they go along. Starting in September, Catholic schools will be teaching children that there are six genders. What the fuck are they? Male, female, man trapped in a woman’s body, woman trapped in a man’s body, hermaphrodite…I can only come up with five. Facebook lists 56 options for gender, including “gender questioning” and “two spirit.” Do these sex-ed teachers honestly think six is going to last more than a year? It’s like the Eskimo words for snow. The number keeps doubling.

When you close your eyes, plug your ears, and say, “La-la-la-la-la, everything is normal and everyone’s the same,” you run into problems real fast. You can start by claiming nothing is perverted but before long you”re having “Sympathy and Science for Those Who Want to Have Sex With Children.” You begin by defending a woman’s right to choose but before you know it, killing newborns is deemed “morally irrelevant.” The lunatics are running the asylum and they”re running it into the ground.