Triumph of the Mediocre 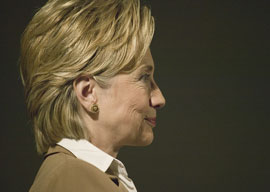 Hillary Clinton, so we are told, kept a spreadsheet devoted to her enemies, whom she rated on a scale of her own devising. I can”t say this surprised me: Mrs. Clinton doesn”t have a forgiving face. She is more Lady Macbeth than Cordelia (she would be wonderfully cast as the former), and while it is unwise to always judge a person by his or her face, it is even more foolish never to do so. A person’s appearance is at least as trustworthy a guide to his character as his words, especially when his stock in trade is words.

I suppose that keeping your hatreds warm, never forgetting them, and fanning their embers when they threaten to go cold is one way to succeed in life”perhaps the way if you are an ambitious person of no particular talents or gifts for anything but intrigue and bureaucratic infighting. This is not to say that talented persons never bear grudges or never hate, but their ascent is not attributable solely or even in part to acting upon their grievances or resentments, and they would have succeeded in life even if they had been more sweetly disposed to their fellow beings. Nor do I mean, of course, that untalented people are intrinsically prone to hatred: That, too, would be a logical mistake.

“The mediocre triumph because, having little or nothing else to do, they can devote themselves to intrigue, backstabbing, and jockeying for power.”

The ability, willingness, and desire to hate are keys to success for untalented persons because they lend to their conduct a ruthlessness that it might otherwise lack. Moreover, it serves as a moral justification for that ruthlessness. Everyone thinks that he is a good person, give or take an occasional fall from grace. It follows, therefore, that those whom he hates must be bad persons, as must be those who are or whom he imagines to be his enemies. (Such a person hates his enemies, but not only his enemies.) It also follows that ruthlessness becomes a moral duty, for otherwise the bad would triumph over the good. Did not Burke say that all that was necessary for evil to triumph was for good men to do nothing? Actually, it is not certain that he said it, but a moral aphorism’s truth does not depend upon its provenance.

So in the minds of the untalented ambitious, their own ruthlessness becomes not a rather unpleasant human trait, occasionally but by no means often justified by the moral purpose that it serves, but rather a sign of their own purpose’s laudable seriousness. Only the ambition of others is bad, but that is because they are enemies or bad people. Hence, no quarter is due to them, and scruple becomes faintheartedness or cowardice.

It might be my age, the age at which one is biologically programmed to believe that the world is going to what Mr. Mantalini called the demnition bow-wows, but it is my distinct impression that the world, or at least the Western world, is filling up with the untalented ambitious.

The mediocre triumph because, having little or nothing else to do, they can devote themselves to intrigue, backstabbing, and jockeying for power. In my own little career, I have often seen the genuinely gifted and morally upright pushed aside or thwarted by schemers and apparatchiks who viewed their betters with a mixture of fear and hatred. An apparatchik may be defined as a person who doesn”t mind how long a meeting goes on unless he has another meeting to attend. He is interested in power for its own sake, divorced from purpose though he claims to want it for the good of humanity, but has very sensitive antennae for the power of others. When that power is strong, he retreats; when it shows a weakness, he pounces. Apparatchiks, like the Clintons, never forget; their minds are like filing cabinets.

There are Mrs. Clintons now in all organizations, each according to his or her level. Some dictate the fate of nations and others decide on the most trivial of local matters, but their manner of proceeding is identical. Why, almost everywhere you look, should such mediocrity triumph?