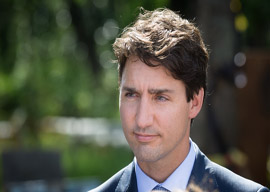 Sure, conservatives can lamely joke that as long as PM Zoolander’s not in Parliament, he can do less harm. (Just ask the female MP he elbowed in the tits.) But is even that true? Every time he attracts media attention abroad, Trudeau accidentally advertises Canada’s sheer stupidity for voting for him.

Not all of us, obviously, but it’s hard to explain to Americans how a dude who won less than 40 percent of the popular vote gets to form something call a “majority” government. And you guys aren”t helping, by the way: handing True-dope fake awards, inviting him to all the global one-percenter confabs, and going gaga every time he shows his stupid face.

Take showbiz industry bible Variety. Reporting on a major mogul-studded media conference, they shoved rumors of multibillion-dollar entertainment-conglomerate mergers below the fold and headlined their story “Justin Trudeau Charms Sun Valley,” topping it off with a big photo of the Haircut That Walks Like a Man:

Conference-goers gave Trudeau high marks, describing him as “hyper-articulate” and “visionary.” One member of the audience for Trudeau’s appearance said the crowd was charmed by the Canadian prime minister. “He looks about 25 years old and he was a delightful speaker,” said the participant.

All that, even though Trudeau “made no major news” and “[k]ept it pretty light””that is, talked about himself and not Canada. Again, folks, let’s try to be grateful. Remember what happened at Davos, when he proclaimed (utilizing Unnatural Ex-Drama-Teacher Voice No. 4):

What the hell did it even mean?

We”re supposed to believe that all these public appearances “sell” Canada to the rest of the world, that Trudeau is here, there, and everywhere on “official government business.” But that’s not true.

Let’s look at memos acquired through an Access to Information request. In mid-March, Trudeau flew to New York City to receive a “special commendation” (not even the real bling) from something called the Catalyst Awards. (Think of that tiny Oscar they gave Shirley Temple”I was going to write “just for existing,” but in fairness, Temple was far more accomplished than our PM.)

Justin received this prize for ostensibly appointing a gender-balanced Cabinet (in which five of the women would be paid less than the men”ooops!) and for correctly guessing which year it was.

Those PMO memos reveal that Trudeau scooted away from Ottawa while Parliament was in session solely to snag this dubious honor and get fawned over one more time”as aides tried to build a “government business” alibi around this mini-vacation to the Big Apple.

So far, I fail to see any economic benefit accruing from Trudeau’s sick-making spread in Vogue or his get-a-room bromance with Barack Obama (who quipped, during an excruciating 50-minute address to the House of Commons, that he prefers the phrase “dude-plomacy“).

Certainly not enough to offset the tax hikes, the influx of unvetted, illiterate, troublemaking “Syrian“ “refugees,” and the ever-present free-floating irritation I endure, and that peaks at least once a day, when newscasts dutifully relay Justin’s sonorous lectures about carbon taxes, “trans rights,” and other make-believe.

Okay, that’s not entirely true. Because as I review my back catalog, I”m forced to admit that Justin has, in fact, been rather good for (my) business. Here I was, typing this very column up on Sunday afternoon, when I noticed that “Auschwitz” was trending on Twitter. And wouldn”t you know it? Trudeau had just toured the site! Visions of plotzing Taki’s commenters danced in my head!

Unfortunately for my purposes, “The prime minister spent nearly three hours walking through the camp without saying much,” which might be a new personal best.