Trump Supporters and Their Fair-Weather Friends 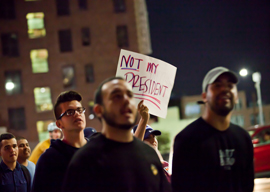 Rapper Kanye West was just carted away to a mental institution for #TrumpingWhileBlack and he will likely spend Thanksgiving in his hospital room. West’s team has canceled his tour and concluded he’s lost his mind because he’s a black man who sees the merits of a Trump presidency. “I didn”t vote,” he told an audience in California last week, “but if I did, I would have voted for Trump.” A few days later, he doubled down by telling concertgoers,

BeyoncÃ©, I was hurt, because I heard that you said you wouldn”t perform unless you won Video of the Year over me and over “Hotline Bling.” In my opinion”now, don”t go trying to diss BeyoncÃ©. She is great. Taylor Swift is great”we are all great people. We are all people. But sometimes we be playing the politics too much and forgetting who we are, just to win. Fucking winning. Fucking looking cool. Fucking being cool.

He was referring to the free concert BeyoncÃ© did for Hillary and his quote is one of the saner things I”ve heard this election. In fact, it’s the sanest thing Kanye West has ever said. This is the fool who thinks he’s going to run in 2020. He’s constantly terrorizing awards shows and he interrupted a Katrina PSA to tell America, “George Bush doesn”t care about black people.” I”ve compiled a big list of his most retarded quotes and they are all a thousand times more likely to get someone committed than anything he’s said this week.

“I can give a million reasons why it’s time for a president who is “not presidential,” but they refuse to consider any of it.”

What is really going on here is thought policing. Alex Jones is convinced West has been kidnapped by his staff and forced into a reeducation facility, and if you strip away all the hyperbole, that’s basically what happened. The rapper who calls himself Jesus blasphemed the progressive gods and he must be punished. He questioned Saint Bae and refused to disavow the Prince of the Devils. This made the liberal puritans apoplectic because they”ve never considered the possibility their version of events isn”t carved in stone. However, they are the ones who should be taken to a mental institution. They are the ones having a nervous breakdown and severing lifelong friendships based on rhetoric.

There are a lot of articles about relationships falling apart over Trump, but the tone is often “Racist man ostracizes significant other with his terrible bigotry,” as opposed to, “Woman who has never cared about politics or known anything about it suddenly ruins relationship based on juvenile narrative that sounds like it’s out of the miniseries V.” I spoke to a couple dozen Trump supporters about the reactions they”ve received since the election (very few would allow me to use their full names). Men in red states have been experiencing unprecedented laidness. “I live down here in the Panhandle and it’s the opposite of what you guys are getting,” says ex”naval officer Tim E. in Florida. “We feel so much better now that he’s been elected.” They got their man and conservative couples who voted together seem to be experiencing a second honeymoon.

Unfortunately, here in the Northeast, it’s quite different. (Although I do have one case of a man who can”t peel his girlfriend off him despite her caring nothing about politics. “I”ve had an aura of winner,” he said. “It’s a confidence aphrodisiac.”) Andy, a technician from northern New Jersey, told me his wife would “break down into tears” when she saw him. This lasted for days. Video producer Pawl Bazile was fired from his waiter job by a manager who hated Trump. “I might sue,” Pawl said, “but I like the owner and I don”t want to screw him over.” The CEO of GrubHub decided to punish all their pro-Trump employees by encouraging them to quit. This launched a huge backlash and the company’s stock price has been in a free fall ever since. Like Pawl, GrubHub’s employees didn”t sue. Our people are much less litigious than theirs. While Democrats fabricate receipts that say, “I”m sorry but I cannot tip because I do not agree with your lifestyle,” we take real-life prejudice and laugh it off. As long as we”re not being kidnapped and hospitalized, we”re fine. “My whole office also laughed at me for supporting Trump and mocked me all day on the election,” said Trav, a sales guy who works at a tech company similar to GrubHub. “Next day I went into work with my MAGA hat and my Trump shirt and nobody would talk to me. It’s a lot of women, too”big surprise.” Tim is a bouncer who said, “The gay and minority coworkers appreciate my differing view and get that I just want a better country for my kid. All my white middle-class friends have bailed on me and treat me like a leper.” This seems to be a pattern, lots of privileged white people telling privileged white people they”re privileged white people. The childless are particularly spiteful.

To be clear, I”m not complaining. I”m just confused. We won. They lost. They need to get on their knees and kneel before Zod. It’s like going out on the field to shake the losing team’s hands after a game and they yell, “FUCK YOU!” from the dugout. Huh? Even my church is in mourning. I walked in expecting high fives from everyone, but the sermon was about surviving adversity and remembering to pray even when you feel all is lost. The only thing lost is a bunch of irrational babies who have never faced reality before.

When we got back from church, my liberal wife hugged me and said, “I forgive you.” I replied, “For what, making America great again?” and she recoiled in horror as I marched proudly back to the doghouse. My brother’s girlfriend is still livid that he “supports hate” and he lives in Canada (Australian Trump supporters are getting this too for some reason). The bickering drove him further to the right and he decided to get a “Proud Boy” tattoo, which led her to burst into the tattoo studio and start punching him in the face. Who’s nuts here?