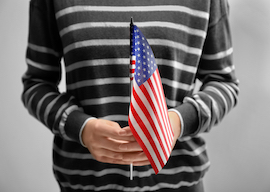 Mass migration “lit the flame” of the right-wing populism that is burning up the Old Continent, she said. Europe must “get a handle on it.”

“Europe must send a very clear message — ‘we are not going to be able to continue to provide refuge and support.'” Should Europe fail to toughen up, illegal migration will never cease to “roil the body politic.”

And who is the lady who issued the dire warning and dispensed the tough-love advice to Europe? Marine Le Pen?

No. It is Hillary Clinton, spouse of the Great Triangulator.

Democrats may have piled on Clinton for selling out progressivism, but her political instincts here are dead on. She has grasped something her party willfully refuses to recognize — the growing salience of the issue of mass illegal migration into Western societies.

According to a new Gallup Poll, concern over immigration and illegal aliens soared from 13 to 21 percent of the public in November, as the No. 1 problem on the minds of the American people.

And this was before Sunday’s violent collision at San Ysidro where the Border Patrol fired rubber bullets and used tear gas to stop a mob of hundreds — out of the thousands of migrants housed in a stadium in Tijuana — from breaching our border and pouring into our country.

“Immigration, race, culture, the economy and education appear to be the agenda Americans want addressed in 2020.”

TV footage of the attempted breach, and photos and stories that major newspapers are putting on Page One, will sustain the national focus on what, since the election, has re-emerged as the nation’s primary concern.

With Mexico about to install a leftist government and new caravans forming in Central America to move through Mexico to the U.S. border, this issue is not going away before the 2020 election.

And with nearly 10,000 migrants being held in Tijuana for more than a week, in what the city’s mayor calls a humanitarian crisis, new and more desperate attempts to breach our border can be expected.

Rocks and bottles were hurled at the men and women of the Border Patrol Sunday, which brought the tear gas and temporary closing of the San Ysidro crossing. New, more serious, casualties cannot be ruled out.

Monday, Trump called on Mexico City to deal with the migrants seeking to breach our border, and threatened that if Mexico does not act, he could close one of the world’s busiest crossings, and for good:

“Mexico should move the flag waving Migrants, many of whom are stone cold criminals, back to their countries. Do it by plane, do it by bus, do it anyway you want, but they are NOT coming into the U.S.A.,” Trump tweeted, “We will close the Border permanently if need be. Congress, fund the WALL!”

Trump thus laid down a marker for himself. Either he halts the caravans, or he will be seen as the failed enforcer of America’s border.

In that Gallup Poll there is other major news.

Among the problems facing America, in the eyes of her people in November, not one of the top 10 involved a foreign threat. In the following order, all involve the troubled state of our splintered nation: immigration/illegal aliens; dissatisfaction with government/poor leadership; health care; unifying the country; race relations/racism; lack of respect for each other; ethics/moral/religious/family decline; economy in general; unemployment/jobs; and education.

Immigration, race, culture, the economy and education appear to be the agenda Americans want addressed in 2020.

What does this portend?

While progressives may have piled on Clinton for her comments, and she may have “clarified” what she said, she has hit on something. Mass migration from the Third World has not only been the major progenitor and propellant of the right-wing populism that is raging across Europe, it also played an indispensable role in defeating her and electing Donald Trump.

And if the Democratic Party and its presidential candidates in 2020 are seen as abolish-ICE, pro-amnesty, open borders liberals, they will pull their party out of the mainstream of this nation on the most divisive issue of our time — the Third World invasion of the West.

For Trump, the die is cast. Not only are border security, the wall, and his pledge to halt the illegal invasion of his country what got him elected, they appear to be a primary argument for his re-election.

But according to Gallup, none of these issues is a top concern or problem for the American people.

Progressives fail to understand that what they describe as greater and ever more desirable diversity, millions of Americans see as the conquest of their country by an endless flood of uninvited strangers.