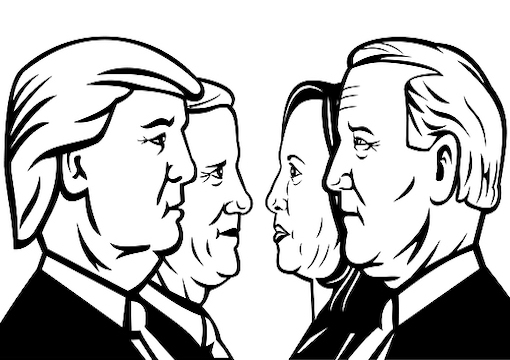 Recent polling by the Pew Research Center indicated that Democratic presidential nominee Joe Biden had a nearly 89% lead over Trump among black voters. Hence the president’s desire to get more black votes via his “Platinum Plan.” It seeks to send billions in aid to black communities, further criminal justice reform, make “Juneteenth” a national holiday, classify lynching as a federal crime, and designate Antifa and the Ku Klux Klan as terror groups. And yet, Trump’s primary obstacle on the road to a second term is not too few black voters, a demographic Republicans have never needed to win elections. His primary obstacle is too few whites. A new Hill/Harris poll shows Trump with only 49 percent; Rasmussen gives him 50 percent. In 2016, Trump won 57 percent.

There are other problems with the Platinum Plan. It promises infrastructure investment of $500 billion in black communities, aiming to create 3 million new jobs, and 500,000 black-owned businesses. But as Washington Watcher II comments at VDARE: “As part of a general economic plan that would benefit all Americans, that wouldn’t be so bad. But this is a pledge intended only for blacks. Is this legal?” Moreover, is it not likely to alienate at least some of Trump’s white working-class voting base?

“President Trump’s historic First Step Act has been hailed as the most meaningful criminal justice reform in a generation, bringing fairness to our prison system and preparing inmates for reentry into society,” says Corrin Rankin, a Black Voices for Trump Advisory Board Member. “With his commitment to enact a Second Step Act in his second term, President Trump promises to bring justice to communities that have been denied fairness for far too long.” Actually, however, as Tucker Carlson noted on his television show in July,

when the First Step Act was being debated, we were all told that only nonviolent criminals would be the beneficiaries of the law…. But that turned out to be completely untrue. In less than a year, the First Step Act has granted early release to a lot of dangerous people, and it didn’t require any of them to do anything to earn it. Here’s one example.

In October 2008, Okin White participated in the robbery—an armed robbery—of a Brooklyn apartment. During that robbery, White and his accomplices tied up two children, including a 7-year-old girl. They pistol-whipped a woman and threatened to kill her and her entire family if she didn’t reveal where the cash and the drugs were hidden.

“The Platinum Plan seems to be a futile effort to appeal to blacks, at the high cost of alienating Trump’s white working-class voting base.”

Every victim of that robbery had to be hospitalized; one, for more than a week. Now, White would still be in prison right now where he deserves to be, but thanks to the First Step Act, he was released last week. Here’s the key. He didn’t join any recidivism reduction program. Instead, since the bill retroactively increased his good-behavior credits, his sentence was simply shortened. White didn’t have to do anything. He is out of federal prison now, along with hundreds of other people like him convicted of sex crimes, robbery, assault, and other acts of violence.

Since the bill passed in 2018, about 4,700 incarcerated people have been released or had their prison sentences reduced. “Why the hell did I do that?” Trump reportedly yelled at his senior aides after the policy he implemented failed to improve his polling numbers among black voters. Trump’s “commitment to enact a Second Step Act in his second term” may prove to be similarly unfruitful.

According to Daily Wire editor in chief Ben Shapiro, “Juneteenth should absolutely be a national holiday. It’s a reminder of the horrors of slavery and racism, and the virtuous quest to vitiate the evils of bigotry and tyranny by vindicating the universal ideals of the founders.” That is a lofty but dangerously naive take. “That the US doesn’t have an Emancipation Day to mark our abolishing an institution antithetical to our founding ideals of freedom & liberty speaks to the ongoing cover-up and our inability, still, to acknowledge what we did and who we are,” 1619 Project director Nikole Hannah-Jones has tweeted. These words highlight the problem with making “Juneteenth” a national holiday (one that is lost on Shapiro): that it would serve mainly to instill shame in Americans and hatred for the nation’s past. In effect, it would be little more than a tool for the manipulative left and race hustlers.

To be sure, the Platinum Plan is not altogether wrongheaded. It promises “favorable trade deals to bring back manufacturing jobs and help black contractors, farmers, inventors, and consumers.” Such deals would not benefit blacks only, of course. The Platinum Plan also seeks to protect jobs through immigration policy.

Excellent, too, is its advocacy for school choice, from which underperforming black students have much to gain.

All in all, though, the Platinum Plan seems to be a futile effort to appeal to blacks, at the high cost of alienating Trump’s white working-class voting base. The president has done better by stressing the need for law and order, calling out Antifa and Black Lives Matter to that end. Trump supporters are also pleased, no doubt, that he recently created the 1776 Commission to counter the teaching of the 1619 Project and other anti-American propaganda in our schools. “Our mission is to defend the legacy of America’s founding, the virtue of America’s heroes, and the nobility of the American character,” Trump said at the White House Conference on American History on Sept. 17.