Turn On, Tune In, and Drop Out 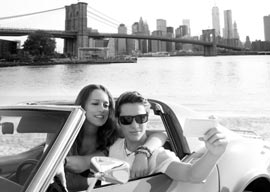 So, I”m walking along the East River the other day and I see this twenty-something couple sitting on a bench, reading old-timey books. I was surprised by my own reaction which was, “Ew.” Then I realized, people between the ages of 20 and 25 should not read books. Their brain isn”t fully developed. We don”t need them figuring stuff out for us. We certainly don”t want them voting and nobody is asking a 22-year-old for advice. They don”t have the language at their disposal and say, “Like” so often I find it physically painful. Why were these two wasting their time reading about Heathcliff and Catherine? They should be Heathcliff and Catherine. They”re in New York City. Go break into an abandoned building. Jump the turnstiles and go to Coney Island. Take her on dates. Go on a Gangs of New York walking tour or the punk tours John Joseph is doing. Cheat on her. Get caught. Get slapped in the face and have a drink thrown in your face. Go make some art or music. Travel in a pack. You should have a dozen roommates at that age and you should always be up to no good. As Lars Frederikson said, “I don”t go anywhere without my switchblade. I don”t go anywhere without my crew.” Switchblades are illegal. Good. Get arrested. Spend the night in the Tombs. Fold the peanut butter sandwich they give you in half and stick it under your tailbone so you can sleep sitting up. Go on a ride-a-long with a cop. I don”t listen to anyone on the subject of policing if they haven”t done a ride-a-long.

All right, sure, we need some young people taking STEM too but the nerds autistic enough to handle that vocation are maybe 5%. The rest of these students need to turn on, tune in, and drop out. There are no job opportunities for genderqueer bloggers who want “full communism.” Society needs them about as much as they need toddlers trained in MMA and baseball players who can quote Kierkegaard. Get a job as a garbage man. Clean windows. Work in a factory. We had a GM factory near my hometown and on long weekends the twenty somethings who worked there would leave work on Friday, drive 22 hours to Florida, party their asses off, and drive all night to get back to work on Tuesday morning. They were like a band on tour but the show was picking up girls and getting wasted.

Everyone that age should start a band. We don”t need bald people making rock and roll. Rebellious music is about sex and violence. Us old timers aren”t good at either of those things. When The Clash came out in 1977 fans were mortified to see Joe Strummer on stage. “He’s 26!” they cried, “That’s only a few years younger than my dad.” We need people out on the streets creating frivolous pop culture. Tyler the Creator just put out a line of t-shirts featuring a white power symbol in LGBT colors and the slogan, “Golf Pride World Wide.” That’s what young people should be doing with their time, not lying around with some Victorian classics like a goddamned senior citizen.

Actually, to call these people seniors is too kind. Senior citizens survived the Great Depression and chased Nazis all over the world. Today’s kids are more like children. On the train this morning, I saw a twenty-something decked out in a movie-quality Captain America costume. I asked him what he was doing because I knew I”d be writing this and he said, “I”m going to a photo shoot.” I asked him why and he said, “It’s just a photo shoot. A bunch of us are doing it. Spider-Man is going to be there.” Assuming he meant another man in a costume and not the real Spider-Man, I walked off the train horrified (as the train pulled out, I saw a man in the next car wearing Despicable Me pajamas). When I bring this up with young people, it’s never occurred to them anything’s wrong. The technician for Anthony Cumia’s show must be about 23 and told me he was a virgin like he was telling me he hadn”t seen the Grand Canyon before. “Girls have cooties when you”re 12″ I explained to him, “Then, someone flicks a switch when you turn 13 and all of a sudden you”re surrounded by angels. You”ve been surrounded by angels for a decade and you haven”t tackled one yet!” He’s not alone. Time recently reported “Today’s young people just aren”t as interested in notches on the bedpost.” Don”t get me wrong. You”ll never see a happier woman than a young Catholic girl who married early and had three kids but that’s not what’s happening. They”re not replacing hedonism and fun with tradition. They”re rejecting both and replacing it with… nothing.