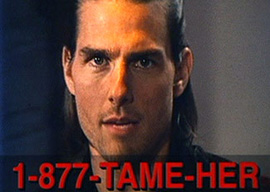 I spoke too soon when I reported back in January that women no longer have any problems.

The armchair Freedom Riders at the weirdly named Southern Poverty Law Center (or “$PLC“ as one of its dogged critics prefers) have been courageously, er, browsing the Internet and have uncovered a potentially devastating threat to not only America’s females, but its national security:

Dudes trading tips on getting laid.

Forget Arabs flying planes into buildings, you stupid cops and spies. The SPLC”whose dispatches are “sent to every law enforcement agency in the country“”has named the real enemy: white men unzipping their flies.

For those unfamiliar with the pickup artist (PUA) concept, think of Tom Cruise’s character Frank T. J. Mackey in the corrosively depressing indie hit Magnolia (1999). During “Seduce and Destroy” seminars in airport hotel conference rooms, the foul-mouthed Mackey coaches hapless beta males on how to score.

“I guess I”m too dumb to appreciate the brave, hard work the SPLC is doing on my behalf.”

“Roissy“”he took his nom de poon from a character in the S&M classic The Story of O “is the Tolkien of pickup artist Middle Earth, having invented or refined the manosphere’s glossary: alpha male, game, wingman, the “anti-slut defense“ (“I don”t usually do this sort of thing…”), and negging (offering attractive women teasing insults instead of compliments: “You have really big ears. Don”t worry, I think it’s cute, kind of like a bunny.”).

Oddly, Roissy’s not on the SPLC’s roster of sinister “misogynist” sites. But the SPLC is none too amused by a site called “Boycott American Women“:

It reads like the minutes from the pitch meeting for Sex and the City.