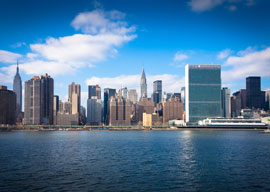 So has everyone finally recovered from United Nations Day?

October 24th seems to roll around faster every year. I almost forgot to order the “blue helmet”-shaped cake with cholera-shaped sprinkles and was late mailing out the novelty parking tickets with the comically huge fines you don’t really have to pay.

Since 1971, the General Assembly has been nudging member states to declare United Nations Day a public holiday, just like all those stupid, old-fashioned religious and patriotic ones. In a rare display of the kind of international solidarity the UN was supposedly founded to foster, every country in the world has responded, “Yeah, no.”

This is where I’m supposed to insert the boilerplate about the UN being a “well-intentioned project” that “once served a purpose,” etc. This idea is a cornerstone of received liberal wisdom. That means it can’t be true.

To avoid sounding like one of those anti-Bilderberger bores who sees contrails in the shape of George Soros, I’ll limit my “proof” to two words: Alger Hiss.

“The UN has not even been in imaginary jeopardy since the Eisenhower Administration, let alone in any danger of real-life demolition. We just bitch about it, like the weather.”

American conservatives have denounced the UN as a cesspool of corruption and stupidity almost since the day it was founded. That’s the trouble.

These days, we carefully chronicle tales of rampant sexual exploitation by the UN’s vaunted “Peacekeepers,” who should really consider changing their name to “Piece-getters.”

UN Watch dutifully reports on Muslim member states’ ongoing campaign to criminalize words and images critical of Islam and its bloodthirsty pedophile prophet, who was basically Charles Manson without the songwriting talent.

We roll our eyes when a “country” such as Mauritania gets elected to the UN Human Rights Council despite its population of 800,000 slaves.

And about those land mines: UN defenders point to its “successful” campaign to dig them all up. But if the organization had effectively carried out its alleged mission to bring peace on Earth once and for all, surely there’d be no land mines to dig up in the first place.

Up here, we grumble when”at the behest of one of our mouthiest Official Jews“the UN threatens to declare Canada’s treatment of aboriginals “genocide.” So what if there are more Indians now than there were when the French and English landed? (Also, I missed the part in Schindler’s List when everybody in the ghetto got a big-screen TV.)

Then another year goes by and”yeah, we’re still members of this thing.

To call us masochistic is an insult to groveling gimp-masked subs everywhere. At least a dominatrix’s clients experience a thrill for their money. America’s (and Canada’s) extremely expensive “relationship” with the UN doesn’t even rise to that dubious level of mutually satisfying transaction.

Open George H. Nash’s The Conservative Intellectual Movement in America“every home should have one”to page 247. Meet “conservative sociologist” Ernest van den Haag, whose travels to the Congo in 1961 convinced him that the UN’s “work” had set back the region twenty years. He called upon the United States to let the world organization “vegetate” and “atrophy.”

The UN was right up there with water fluoridation, the Department of Education, and the Red Menace on the right wing’s list of villains throughout the second half of the 20th century.