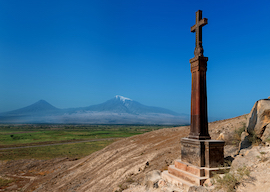 War is fought on two fronts: the battlefield and the mind.

Whereas superior strategy and firepower wins it on the battlefield, the war for the mind is won by successfully tarring and feathering your opponent with guilt. The guilt need not be based on facts, because as I keep learning to my deepening dismay, hardly anyone cares about facts.

To win the battle for the mind, you must convince the masses that you’re the good guy and the other guy is the bad guy. It’s no coincidence that the good guys always win the war, because perhaps the most valuable spoils of war is the ability to define right and wrong, particularly the crucial distinction between “collateral damage” and “victims of war crimes.”

Last week Congress voted 405 to 11 to finally acknowledge the Ottoman Empire’s systematic deportation and murder of Armenians during World War I as a genocide. The USA has apparently shied away from doing this in the past because it doesn’t want to offend Turkey, which is a strategic military ally.

Turkish President Erdoğan dismissed the vote as “worthless” and then threw his own Guilt Bomb right back at America and others who recognize the Armenian Genocide: “The countries who have stains of genocide, slavery, colonialism in their history have no right to give lessons to Turkey.”

Erdoğan did the same thing eight years ago when France recognized the Armenian Genocide: He took them to task for what the French did to native Algerians. And like I noted eight years ago, people never want to claim guilt—they want to toss it back and forth like a live hand grenade.

Erdoğan also claimed that Donald Trump recently offered to call the Ottoman actions against Armenians during World War I as a “war” rather than a “genocide.” And Turkey’s version of PBS threw together a tidy little video explaining the Ottoman viewpoint, which is that Armenians were actively revolting against the Ottomans with significant help from Russian aggressors from the northeast. “Congress, by proclaiming that the Turks were guilty of genocide—even if it was over 100 years ago—just declared war on Turkey.”

Unlike most people, who seem to have entrenched opinions about historical events that they never witnessed, I will say what I always do regarding what happened between Turks and Armenians during WWI: I WASN’T THERE.

However, eyewitness testimony from the era suggests that the Turks were brutal on a Khmer Rouge level. I realize the risks I’m taking here by saying this, but many of these allegations sound far worse than anything I’ve heard about the Holocaust.

The Turkish pogrom against Armenians was launched on April 24, 1915, when hundreds of top Armenian intellectuals were rounded up and murdered. This was the Turkish version of Kristallnacht.

Almost immediately thereafter, hundreds of thousands of Armenians were rounded up and sent on a death march southward to the Syrian desert. They were fed just enough bread and water to permit them to keep walking. And once they reached their destination, they were left there with no food and water amid predatory nomadic Arab tribes.

According to Presbyterian Frederick G. Coan, sometimes the deported Armenians were massacred before they came close to the Syrian desert:

I found one day a great mass of human bones, thirty feet high, and I said to my Turkish guide: “How do you account for this?” He replied: “We got tired of driving them, we got tired of hearing their moans and cries, and took them up that that precipice one day and flung them down to get rid of the job.”

Soldier and photographer Armin T. Wegner says the victims were

…slain by Kurds, robbed by gendarmes, shot, hanged, poisoned, stabbed, strangled, mowed down by epidemics, drowned, frozen, parched with thirst, starved—their bodies left to putrefy or to be devoured by jackals. Children wept themselves to death, men dashed themselves against the rocks, mothers threw their babies into the brooks, women with child flung themselves, singing into the Euphrates. They died all the deaths on the earth, the deaths of all the ages…

Eitan Belkind, a Zionist who infiltrated the Ottoman Army, claims he personally witnessed an event that fits the literal definition of a holocaust:

The Circassian soldiers ordered the Armenians to gather thorns and thistles and to pile them into a tall pyramid…afterwards they tied all the Armenians who were there, almost five thousand souls, hand to hand, encircled them like a ring around the pile of thistles and set it afire in a blaze which rose up to heaven together with the screams of the wretched people who were burned to death by the fire…Two days later I returned to this place and saw the charred bodies of thousands of human beings.

All of these alleged events happened in southern Turkey. On the northern side, a common method of extermination was live mass drownings. There are reports of entire barges crammed with live Armenians being purposely sunk in the Black Sea. Other reports say that Armenian children were tossed overboard.

Oscar S. Heizer, an American consul in Trabzon, writes, “Many of the children were loaded into boats and taken out to sea and thrown overboard. I myself saw where 16 bodies were washed ashore and buried by a Greek woman near the Italian monastery.”

According to Hafiz Mehmet, Deputy and Justice Minister in the Republic of Turkey:

Under the pretext of sending off to Samsun, another port city on the Black Sea [about 160 miles west of Trabzon], the district’s governor loaded the Armenians into barges and had them thrown overboard. I have heard that the governor-general applied this procedure [throughout the province].

The Ottoman Turks apparently employed every method of extinction they could imagine.

Most strikingly, there were at least two reports of Armenian schoolchildren being herded into school buildings and gassed to death.

According to Martin Niepage, a German schoolteacher in Aleppo, a German consul from Mosul told him that on the road from Aleppo to Mosul, “he had seen children’s hands lying hacked off in such numbers that one could have paved the road with them.”

And apparently these were not the flailing acts of a crumbling empire in the midst of losing a war: The extermination of Armenians had all been planned years beforehand. Danish professor Johannes Østrup claims that in 1910, five years before the grand purge began, future Ottoman leader Talat Pasha told him that his plan was to exterminate the Armenians:

It had really been Talat [Pasha]’s plan to exterminate all of the Armenian people, and the plan did not originate as the result of a war psychosis. I spoke with Talat on several occasions in the autumn of 1910, and among many other things we also talked about the Armenians. “You see,” he said, “between us and this people there is an incompatibility which cannot be solved in a peaceful manner; either they will completely undermine us, or we will have to annihilate them. If I ever come to power in this country, I will use all my might to exterminate the Armenians.”

Five years later, Ottoman leader Talat Pasha claimed that his extermination mission had been accomplished. These are all quotes from Ottoman officials—not hostile outsiders with an axe to grind—while the purges were happening and shortly thereafter:

Turkey is taking advantage of the war in order to thoroughly liquidate its internal foes, i.e., the indigenous Christians, without being thereby disturbed by foreign intervention. What on earth do you want? The question is settled. There are no more Armenians.
—Talaat Pasha, member of the triumvirate of leaders of the Ottoman Empire, in a conversation with a German ambassador in June 1915

The Ottoman Empire should be cleaned up of the Armenians and the Lebanese. We have destroyed the former by the sword, we shall destroy the latter through starvation.
—Enver Pasha, member of the triumvirate of leaders of Ottoman Empire, quoted on 5/19/1916

Let’s face it, we Turks savagely killed off the Armenians.
—Ahmed Rıza, president of the Turkish Senate, 1918

Has the government even thought about the implications of deporting these helpless Armenians without food or shelter to Der Zor where Arab nomadic tribes solely reside?…The purpose was to annihilate and they were annihilated.
—Mehmet Celal Bey, Governor of Aleppo and Konya

I have endeavored to wipe out the Armenian nation to the last individual….Many of the victims were buried alive in especially prepared ditches.
—Halil Kut, Ottoman War Minister During World War I; he also claimed he personally oversaw the deaths of 300,000 Armenians

I refer to those awful massacres. They are the greatest stain that has ever disgraced our nation and race.
—Prince Abdul Mecid, heir-apparent to the Ottoman throne

Our fellow countrymen committed unheard of crimes, resorted to all conceivable methods of despotism, organized deportations and massacres, poured gas over babies and burned them, raped women and girls in front of their parents who were bound hand and foot, took girls in front of their parents and fathers, appropriated personal property and real estate, drove people to Mesopotamia and treated them inhumanly on the way…they put thousands of innocent people into boats that were sunk at sea…they put Armenians in the most unbearable conditions any other nation had ever known in its history.
—Mustafa Yamulki, Ottoman military officer and head judge of the Turkish Courts-Martial of 1919–1920

Sure sounds like genocide to me. In fact, Raphael Lemkin, a Jewish man who coined the term “genocide” during World War II, singled out the Ottoman Turks’ actions toward the Armenians as the very embodiment of what he meant by genocide. And Jewish people should know a thing or two about genocide, because not only do they claim to be victims of The Genocide That Shall Never Be Questioned, their own God commanded them to kill all the Amalekites and “completely wipe out the memory of Amalek from the earth.”

One reason that Turkey—a nation that literally did not exist during these atrocities—is denying that the Ottomans’ actions constitute genocide is that Turkey would be opening itself up to endless reparations lawsuits by doing so. After all, it’s alleged that the Republic of Turkey launched itself economically with the considerable wealth the Ottomans had plundered from its Armenian minority.

But let’s not nitpick about numbers and specifics, because as I’ve already stated, this doesn’t matter to most people, who desperately want to be on the “good” side no matter what the facts are.

What needs to be understood is that Congress, by proclaiming that the Turks were guilty of genocide—even if it was over 100 years ago—just declared war on Turkey.