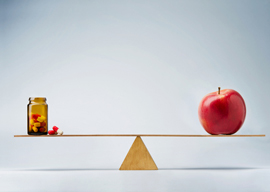 I don”t drive a normal car, so I have no need of one that’s airborne.

You can keep your jet packs, and time travel, too. No, my favorite futuristic fantasy is far more sedentary and quotidian: just hand over those food pills, already.

Sure, I enjoy the occasional hot fudge sundae or slice of good pizza (or six). But eating”or, more specifically, cooking”is mostly a chore, a duty, a speed bump. I”d rather be writing, reading”anything that holds out the promise of novelty, creativity, and discovery.

Eating, on the other hand, is so … ordinary. It feels more like a job than the activity it’s always so rudely interrupting: my actual work.

Long before I was old enough to earn a living, I was enchanted with the food pills on The Jetsons. Imagine: No dishes to do, no oven to remember (or, in my case, forget) to preheat before my mother got home. Such meaningless tedium. Didn”t my mother”didn”t the world”understand? I had better things to do.

(It doesn”t help that I”m also missing the gastro-porn gene. I hear tell that food-themed movies like Eat Drink Man Woman and Babette’s Feast and even 9 ½ Weeks are all terribly sensuous, or maybe sensual”I could never be bothered keeping those two straight. Whereas these “hot” films all leave me colder than yesterday’s leftovers.)

I never outgrew my pubescent impatience with interruptions; with kitchen noises and messes; and, particularly, with that warped inverse ratio between the time spent on food prep versus its consumption.

That’s why I don”t feel the same resentment regarding other chores: none of them are so tied up with time.

Getting up to shift the laundry from the washer to the dryer actually provides a welcome break. But if I leave the clothes in the dryer after the cycle ends, they won”t burst into flames.

Whereas I resent being the clock’s kitchen slave. Knowing I have to jump up in 20 minutes to turn or stir something or other leaves me with 19 minutes to stew about that looming 20th.

But meals in capsule form? I could scarf those down without ever leaving my desk. I could get more work done. Make more money. Whatever satisfaction I experience after polishing off a big, tasty meal (ideally, prepared by someone else) simply can”t compare to the sweet sensation of hitting “send” on an assignment, or getting a big check in the mail.

Does Rob Rhinehart have a solution?

Being the geeky sort, Rhinehart dubbed his food substitute “Soylent,” which is one of the reasons I won”t be trying it. I want iron in my meal replacements, not irony.

The other? According to the journalist who dutifully downed it for five days straight, Soylent tastes like “oversweet vanilla body wash, but with the texture of silt.”