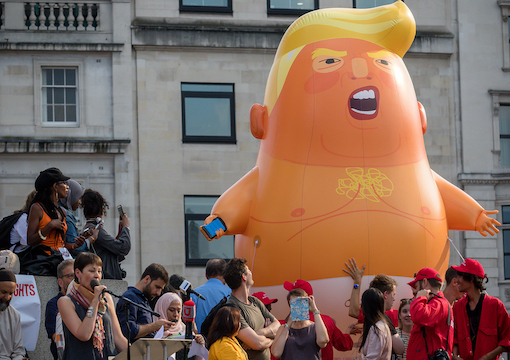 “We know no spectacle so ridiculous as the British public in one of its periodical fits of morality,” wrote the great Lord Macaulay back in 1830.

Last week we had to endure another buttock-clenching spasm of shrill moral posturing and garish self-love, as tens of thousands of assorted morons, misfits, and malcontents, pink-haired and nose-ringed and often obscenely out of shape, took to the streets of London to protest against the visit to our shores of President Trump.

Last Friday morning they gathered in Westminster, before the noble Mother of Parliaments, and beneath the rather less noble inflatable Trump baby. Close up, you realized what an utterly infantile level of political protest (lampoon? satire?) this was.

Another protester—a grown man, an adult—was carrying a life-size cutout of Donald Trump with a pair of soiled white underpants stuck on the front. The word “infantile” hardly does it justice. But the similarly infantile Mayor Sadiq Khan considers it “free speech.”

Another grown man’s idea of free speech and witty protest was to carry a large placard reading “Trump Is a C*nt.”

Stupid young girls giggled that this was hilarious, or amazing, and took selfies standing next to him. The man-child grinned complacently.

Stephen Fry, the noted homosexual comedian with an elfin young husband some thirty years his junior, said approvingly of the protest that some of the demonstrators’ placards “approached poetry.”

Couldn’t see it myself.

There were two modern-type parents who had brought along their children to this carnival of hatred and abuse—sorry, “Carnival of Resistance,” as the organizers called it. The children were perhaps 6 and 8. I asked the father if he minded all the swearing and the obscene placards, and he looked momentarily troubled, saying he’d rather they did it a little differently.

“Then again,” he added, “the other day our youngest said ‘fuck’ for the first time, and I was going to tell her not to say things like that, and my partner said, ‘No, let her, she’s just expressing her feelings and that’s important.’”

Aw, cute. Encourage your kids to say “fuck,” that’s the answer. It’s the only way to fight emotional repression, and probably capitalism and white supremacism as well.

There was even one figure—female, I think—wearing a T-shirt reading “This Pussy Not for Grabbing,” and a large arrow pointing down to her lady garden.

“Madam,” I murmured as I passed her by, “not in a million years…”

Like puritans throughout the ages, they wanted to cast themselves as the Elect, as living saints, by showing their opposition to pure Evil, in the shape of Donald Trump.

After all, didn’t Michael Moore recently tell Stephen Colbert that Trump is the Devil? How delicious to be on the side of Shining Goodness against the Darkness like this—and all with so little effort! No need to really do anything except dress up and shout and scream. No need to address tough problems or think hard thoughts, no need to debate or win arguments. All you have to do is join the chorus of “Burn the witch!”

And what religious fanatics really can’t handle is being laughed at.

I interrupted her conversation with her green-haired friend (gender indeterminate) to ask:

“Why are you supporting an ideology that oppressed and killed so many millions? Do you think that’s a good idea?”

“Well, I just wondered. All these placards saying that Trump is a Nazi. Weren’t the Communists much the same? Or do you think the Ukrainian famine was a good idea?”

She and her Venusian sidekick turned their backs on me. End of debate.

Welcome to Clown Land, formerly known as the City of London, capital of the English, famous for its polite and unarmed policemen, its astonishingly low crime rate, its people with their “mild knobby faces, their bad teeth and gentle manners,” as George Orwell so affectionately described them in the 1940s. Those same English people now make up fewer than half of London’s inhabitants, while the rest spend more and more of their time and energy murdering each other.

This great replacement is a thoroughly good thing, though, as it means London is less white than it used to be (obviously a good in itself) and is more of what Mayor Sadiq Khan, a Pakistani gentleman, calls “a world city.”