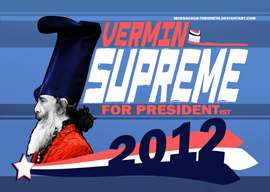 On Monday, supporters of Rick Santorum clashed with Santorophobes outside a New Hampshire sports bar. Both sides were angry enough to fight about it. Talk about politics as snooze-ual. Santorum’s apparently a bigot because he’s not bananas about gays, and the “bigots” are mad that pro-gay witch-hunter Dan Savage managed to get his revolting definition of “Santorum” into the popular vernacular. Even Rick’s daughter concedes that this “Google problem” was a victory for her dad’s opponents, but it’s really the same old Christians v. non-Christians beef. Which is really the same old upper-middle-class v. lower-middle-class beef. Which is really the same old traditional v. nontraditional beef. Which is really—wait, just when we were about to die of boredom, a man with a boot on his head shows up and tries to shake Rick’s hand.

His name is Vermin Supreme, and although he’s also running for president, he wanted to congratulate Santorum on a great campaign. This brief moment of sanity was met by rage on all sides, and Supreme was mobbed. He disappeared in a flurry of fists and his media director FluxRostrum was sent careening to the ground. Afterward, Supreme shrugged and told a reporter he’s OK: “I’m tough and rough like that.”

“Vermin Supreme is the world’s only wannabe dictator who wants no government whatsoever.”

While everyone was using a handful of homos to trot out the same old beefs, a hero broke through the crowd and exposed them for what they really are: a bunch of hysterical babies who will do everything in their power to prevent people from shaking hands. That’s all this election is. It’s a bitchfest.

Here are 10 other reasons you should elect Vermin Supreme as the next president of the United States:

1. HE’S A DICTATOR
Obama has been trying to get things done since day one, but as the Coffee Party pointed out, racists keep standing in his way because they’re racist. Thomas Friedman is right: We need a brief period of fascism without all this democracy getting in the way. Supreme calls himself a “friendly fascist” and a “tyrant you can trust,” which is refreshingly honest.

2. HE’LL INSTITUTE MANDATORY TEETH-BRUSHING
If you can bear looking at a British person’s mouth for more than ten minutes you’ll notice it’s talking about how wonderful your teeth are. They can’t believe we have such huge gleaming Chiclets. It’s called fluoride. Supreme recognizes that our shining smiles define us more than apple pie and football, and he means to keep it that way. “We can no longer be a nation indentured,” he says of his brush mandate. “Our very salivation is at stake.”

3. HE’LL INSTITUTE MANDATORY KIDNEY TRANSPLANTS
Kim Jong-il was popular because he was born on a rainbow, French-kissed a nude Pegacorn, and spelled “America Sucks!” in the sky with orange lightning bolts. He was magic. When Supreme heard this he ripped out his kidney so his sick mother could have it. Like the Bible, you don’t need to understand how he does it. Vermin Supreme works in mysterious ways.