Wailing About Whales: The Myth of Interspecies Slavery 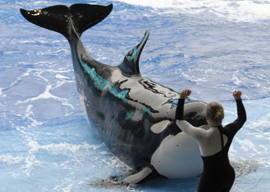 Slaving and whaling dominated New England shipping prior to the Civil War. When the slave trade became illegal in 1808, fewer profits rolled into Yankee coffers. As slave-trade revenues decreased, abolitionist fervor in New England increased. To take up the financial slack, the whaling trade expanded for a while. But with the rise of petroleum products, whaling soon faded, too.

But according to PETA, both these storied maritime enterprises remain alive and intertwined in modern-day California. This is the claim they tried making in a San Diego court against SeaWorld. PETA recently filed a lawsuit claiming that SeaWorld is engaging in interspecies slavery by holding five killer whales captive. PETA appears to hold that these orcas are endowed by their Creator with the same inalienable rights S/He/It granted to humans.

At first glance, one might be tempted to ignore the litigants who filed on behalf of the would-be plaintiffs as mere kooks. And at first glance, a judge dismissed the case. But I think such a dismissal is premature.

“I urge PETA to turn their energy toward relieving the plight of human slaves worldwide.”

Consider the implications if other species were accorded the same legal status as humans. Of the SeaWorld Five, one (Tilikum) killed his trainer two years ago. At the time, she was let off with a mere transfer from SeaWorld Orlando to the San Diego facility because she was supposed to be an “animal.” But if the court had determined that orcas have the same status as human beings, Tilikum would have to stand trial for murder. If convicted and sentenced to death, a large (and aquatic) gas chamber would need to be built.

If animals are determined to have the same legal status as humans, it will be necessary for law enforcement to track down the grizzly bears who occasionally kill hapless wilderness campers. Coyotes will no longer be able to hunt cats without fear of prosecution. Dogs shall have to take responsibility for their own messes in public parks. Canines and felines alike will become legally responsible for their offspring.