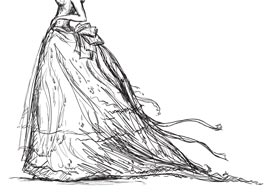 We could try to blame Oprah Winfrey, but for once, that wouldn”t be fair.

On one episode of her program, who knows how long ago, the emphatically unmarried megastar grew visibly impatient with some young woman in the audience who was whining about wanting to get married.

Oprah said something like, “You don”t really want to get married. You just want the wedding, right? To have your “special day”? So buy yourself a white dress and throw yourself a party.”

I remember that because it was something my Brodie-esque Grade 11 religion teacher might have snapped at the gaggle of Ginas clucking over Modern Brides in the back row.

Now: Oprah is, indeed, responsible for plenty of cultural corrosion. That said, I doubt her throwaway comments inspired one Yasmin Eleby”despite her superficial resemblance to the queen-size media mogul”to do what she did last week.

She married herself.”¨
Not really. That’s still not legal. (Give it time.)

But Eleby explained to the press that she had always vowed that if she was still single on her 40th birthday, “she would have a wedding for one.”

“Factor in the steep shortage of un-incarcerated and otherwise non-trifling black men, and presto: Eleby’s narcissistic excuse for a fancy-dress party makes a weird, pathetic kind of sense.”

Draped in a vivid purple gown, and flanked by a half-dozen bridesmaids of equally generous proportions, Eleby wrote, directed, and starred in a “spiritual ceremony” held at the Houston Museum of African American Culture. Given the venue, I presume the festivities included “jumping the broom,” a tradition that, given the average African-American’s body mass index, should probably be regulated by the Department of Health and Human Services, or even banned outright. (Give it time.)

Not only are they rather fat these days, but also”as a friend reminded me when I shared Eleby’s story”blacks possess stratospheric levels of self-esteem, especially the women. Factor in the steep shortage of un-incarcerated and otherwise non-trifling black men, and presto: Eleby’s narcissistic excuse for a fancy-dress party makes a weird, pathetic kind of sense.

Except marrying yourself isn”t just “a black thing”: self-marriages were celebrated by a Dutch woman in 2003, a female from Taipei in 2010, a white chick in North Dakota two years later, and a British lady last fall.

That’s hardly the critical mass required to qualify as a genuine trend, but since when has that stopped social scientists and other hucksters? Some are clearly hoping to turn “self“ into the new “gay” as far as marriage goes. They”ve got the requisite clumsy neologism””sologamy“”and they just need the lucrative movement to go with it.

There follows a metric ton of the sort of New Age prattle even Oprah doesn”t mouth as much anymore: the cloying, clichÃ©d rhetoric crafted to convince lonely, aging, cubicle-bound, carb-addicted females that they deserve to enjoy a “wild and precious life.”

Because, predictably, “self-marriage” attracts, targets, and flatters mostly women. The only references I could find to men marrying themselves were both satirical:

As Nigland became a young man, he started to experience undeniable sexual feelings for himself. “At first, I tried to ignore them. But, one day when my hand innocently brushed up against my thigh, I knew that I had to take it to the next level.”

Not that men are averse to make-believe matrimony: I found a Chinese man who married “a foam-board cutout of himself (…) in a lovely red dress”; a Javan wed to “an ageless, invisible fairy“; a goat’s Sudanese groom; and an Indian and a German hitched to a dog and a cat, respectively.