Weep Not for the Lonely Male Feminist 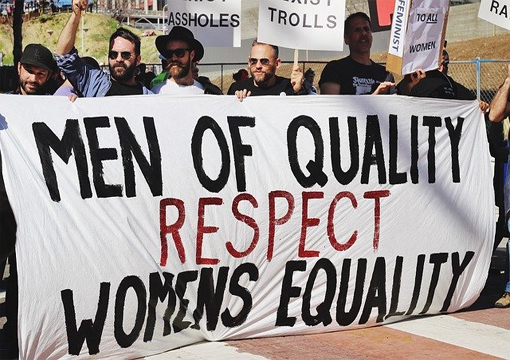 A fellow I know in town recently got divorced.

He was a nice enough guy, and I suspect that was his main problem.

Even pushing 50, he still was afflicted with a touch of Peter Pan Syndrome. He was deeply devoted like a young teenager alone in his bedroom to rare alternative rock records, and for reasons which will never make a lick of sense to me, this somehow comes hand in hand with blindly adopting every hysterically ill-informed and prefabricated political stance that music nerds tend to take.

Musicians can’t even tie their own shoes, so I fail to comprehend why they pretend they can manage the world.

Observing this sad, lumpy fellow’s interactions with his wife over the years, I have no doubt that she was the one who ended the marriage. She worked as an immigration lawyer—pro-immigration, mind you—and once told me that some group who merely opposed illegal immigration was a “hate group.”

Judging from the couple’s body language, she was clearly wearing the pants. Thing is, he espoused all the correct opinions and dutifully caught every crumb falling from her mouth before it hit the floor. He said “Nazis” should be killed. He had one of the most chronic cases of Trump Derangement Syndrome I’ve ever seen. I have no doubt that he slavishly nodded along with everything negative thing she said about men in general and “sexists” in particular. He gave up his job to stay at home and take care of the baby. Rather than deal with what was bothering him, he gobbled down antidepressants. Every year I could see her getting stronger and him getting weaker.
Now they’ve gotten divorced and her “partner” in a law firm is an “out and proud” lesbian.

He looks like a beaten, defeated, stepped-on homeless person, a shattered man making limp affirmations on social media like a brokenhearted teenage girl.

Not once did it ever seem to occur to him that he was way too nice to her and that women, no matter what their stated political and personal preferences, are physically incapable of lubricating for nice guys.

Groucho Marx famously said he would never join a club that would have him as a member.

“Male feminists scratch and squirm and claw and try to appease their way into a club that doesn’t want them as a member.”

Male feminists are the complete opposite—they scratch and squirm and claw and try to appease their way into a club that doesn’t want them as a member.

Take a gander at a sub-male named Max de Haldevang, who despite the rather butch name resembles a teenage female figure skater from the 1970s. Over the course of nearly 1,500 excruciatingly painful words, he punches himself in the crotch again and again and again about how “To be a better ally, I gave up reading books by men for 2019.”

I would have preferred if he had given up writing.

Over at Good Men Project—where men learn to be dutiful lapdogs for women—Oliver Chapman squirms over the question of “Which Type of Feminist Should a Male Feminist Be?”

How about “None of the Above?”

At least that seems to be what the feminists want.

“Is anything creepier than a ‘male feminist’? asks Virginia Ironside in the Spectator:

There are three reasons men declare themselves feminists. Firstly, they’re frightened. They’re so terrified of women’s rage that they [are like] guilty dogs rolling over and thwacking their tails on the carpet in supplication, they seem to be pleading: ‘Don’t hit me! I’m harmless. I’m a feminist!’….

There’s another category of men who simply hate themselves. Little do they know how unattractive this is to women as they announce, thinking they’re being honest, that they’re actually loathsome, vile human beings, horrible people who can’t help thinking about sex all the time, slimy abusive toads, worthless fantasists who, if it weren’t illegal, would, at the drop of a hat, love to be popping out from behind bushes to assault passing women….

And finally, there are the ones who declare themselves feminists in order to establish male superiority. They know we’re weak and vulnerable, and they want to take care of us and protect — all of this with the deeply patronising assumption we need protecting.

And for The Nation, the barkingly hideous Katha Pollitt openly wonders whether recent sexual-assault allegations against New York Attorney General Eric Schneiderman—who was apparently a very loud self-proclaimed male feminist—“Prove We Should Never Trust a Male Feminist?” She even goes so far as to say, “at the moment #NotAllMen is looking more like a wish than a declarative statement.”

Never mind the fact that at the moment, the allegations against Schneiderman are nothing more than that, and it’s established fact that women lie about rape all the time. This absolutely unfuckable excuse for a woman, this boar-sow whose face would make babies cry, is willing to believe all men, including the male feminists, are rapists.

Rest easy, Katha. No one wants to rape you. But you know that. I suspect you’re just pretending they desire you because it’s a very weird form of narcissism.

Writing for the Harvard Crimson as if her words carry intellectual weight and are anything beyond a blast of vitriol and wishful thinking, Nian Hu cautions us to “Beware the Male Feminist.”

And here’s another woman laying out “The problem with male feminists.”

And here are two more gals cautioning us to “Beware These 10 Types of Feminist Men.”

In other words, “Hey, ally—go fuck yourself!”

There are even male feminists so clueless that they write articles called “The trouble with male feminism.”

On this point, I agree with feminists: Let’s get all the men out of feminism. Both genders will thank us.

Just like the “anti-racist allies” who, despite all their efforts, continue getting clubbed over the head about how they’ll never get it because they’re white, the male feminist gets scolded for how much he sucks at male feminism.

I will never understand this whole going-where-you’re-not-wanted thing.

Attention, male feminists: I’m not sure whom you’re trying to please, but no one is pleased.

No one respects you, least of all yourselves.

Why do you think women need you?

Name a single legal right that women don’t have. Women live longer than men, they don’t do the same time for the same crimes, they don’t even account for 10% of workplace deaths or a quarter of homicide victims, they are favored in all custody disputes and have society-wide presumption of innocence in all squabbles with men, and despite all you hear about the mythical “wage gap,” they control more than half of the nation’s wealth. Yeah, it’s such a racist and sexist country that even black women outlive white men here.

If you understood even rudimentary female psychology, you’d know women are more turned on by a man who doesn’t remember their name than by some soft fool who wants to rush in on a tiny white pony and heal all their wounds.

For all that you claim to understand women, male feminists are absolutely clueless to the fact that all your curtsies and ankle-grabbing make vaginas dry up so quickly, you can hear a creaking sound.

Women understand how rotten women can be, which is why they despise anyone who sees them as innocent, perpetually victimized goddesses. And they can sniff out your weakness from across the country. And it disgusts them.

Self-abasement is never attractive in anyone. You know how they say criminals are a disgrace to the black race? Well, you’re a disgrace to my gender. I could expel every last drop of my stomach acids at the mere thought of your weakness.

Therefore, I shed not a tear for the lonely male feminist whose wife just dumped him, for yea, the fool hath brought it upon himself.