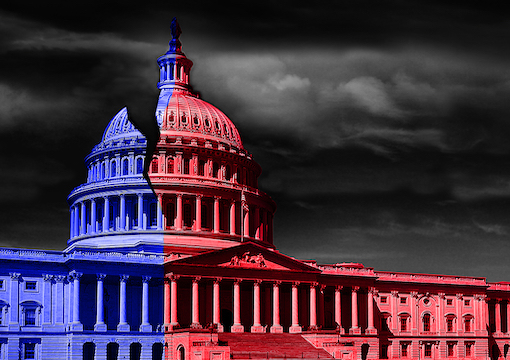 Oh, did I violate the unwritten rule that crass language is most effectively employed as punctuation for effect rather than, say, an opening statement?

If so, my apologies. Now back to the cussing.

“Fuck you…WAR.” Thousands of you tweeted that old Breitbart clip last week, back when you were still ON Twitter, before rightists were purged en masse as “insurrectionists”…before they migrated to Parler, and Amazon, Google, and Apple crippled the platform.

“Screw your optics; I’m going in.” That was the theme of last week. War!

How’d that work out for ya, huh?

A better question, and one I’d ask anybody who supported Wednesday’s Capitol incursion, is: What was supposed to happen? It’s a simple question: What was the endgame supposed to be? Four protesters died, one—a veteran—at the hands of D.C. police. Cops were beaten, and one D.C. cop—also a veteran—was possibly killed by protesters (he died, but the cause isn’t 100% confirmed).

Okay, this was the bad outcome. Tell me: What was the desired one?

“Nothing will stop us,” wrote the MAGA Air Force vet hours before she was shot dead trying to climb through a broken window next to a barricaded doorway inside the Capitol. “Stop us” from what? What was the point of the exercise? What was the goal?

As Wednesday’s disaster unfolded, rightists on Twitter—painfully aware of the clusterfuck they were witnessing—spent the first part of the day claiming that the shitshow was ackshually an Antifa/BLM psyop.

“I smell a false flag. Saul Alinsky tactics. Antifa posing as MAGA,” tweeted Trumper UnityOfGod (200,000 followers at the time, now purged). “Does anyone seriously think these guys are MAGA?” tweeted superstar rightist attorney Ron Coleman. “ANTIFA MEMBERS and BLM are the FUNDED ONES WITH ARMS AND VIOLENT – IS THIS A PSYOP TO BLAM (sic) MAGA VOTERS? JUST ASKIN’” added conservative radio host Rose Colombo, apparently on a keyboard with a jammed caps lock key.

Dinesh D’Souza tweeted that the evidence indicates that “the people who broke the windows were not #MAGA at all.” And Candace Owens reassured the Twittersphere that she has “a hunch” that the rioters are “ANTIFA thugs.”

As it became painfully clear that the rioters were indeed MAGA, folks like D’Souza and Owens scrambled to find a new angle.

D’Souza (in a series of tweets):

It’s somehow okay for the Left to topple monuments, burn businesses, create “autonomous zones,” drag people out of restaurants & cars, and cause all kinds of violence and mayhem; yet it’s an “unprecedented assault on democracy” when Trumpsters stage their own protest? When Antifa and BLM organized protests vastly more violent and destructive than anything we saw today, Joe Biden and Kamala Harris helped to raise bail money for them. This is the necessary context in which to understand their selective moral indignation over today’s events. I don’t approve of storming the Capitol but isn’t it a fact that if Antifa and BLM did it, the media would be in raptures about the passionate demonstration of commitment to racial justice?

“It’s not us” became “Hey, the other side does it too, and they get treated better! No fair!”

Do you guys think that what is happening in D.C right now will be characterized as mostly peaceful protests? Or does that media spin only work when ANTIFA spends an entire year rioting, looting, and beating law-abiding citizens? Just curious.

Again, “Antifa’s doing it” magically transmogrified into “If Antifa were doing it, it’d be judged differently.”

As “groypers” like Nick Fuentes and “Baked Alaska” celebrated their triumphant aktion, rightist Twitter settled on the “if this were Antifa/BLM” “double standard” talking point.

“BLM can burn, loot, and murder but we aren’t allowed to protest a stolen election,” tweeted Jaden McNeil, founder of America First Students.

“Don’t you want to have stuff to be proud of, instead of blunders to excuse?”

“The DC Mayor is calling for law and order. Where was she at when BLM and Antifa was destroying DC over the summer?” tweeted (for Christ’s sake, do I have to type this?) “Diamond and Silk.”

Inherent in the two angles—“We didn’t do it!” and “We did do it, but they do it too!”—is the tacit admission that what went down on Wednesday was bad. If what transpired had been good, either in goal or execution, that would have been the angle. People only deny or deflect when they can’t support something on its merits.

Doesn’t this get tiresome to any of you? Always having to revert to Newsbusters mode and trot out the “We’re being treated unfairly! Double standard!” trope because instead of having accomplishments to cheer, all you have are cock-ups where the only effective response is “We made a stinky, but they did too”? Don’t you want to have stuff to be proud of, instead of blunders to excuse? Sure, Trump was treated unfairly by the press during his presidency. Only a blind man (i.e., a leftist) could deny that. But I’d sure as hell get more pleasure from a completed border wall or foundational changes in immigration policy than I do from whining about “unfair reporters are unfair!”

Following Wednesday’s lunacy, my Twitter feed and DMs exploded with childlike wailing about “looky what leftists get away with!”

And as I read those posts and DMs, all I could think of was the scene in Red Dawn (no, not the remake, which doesn’t exist in my universe) between Colonel Bella and General Bratchenko, and the three words Bratchenko used to shoot down Bella’s advocation of U.S. Vietnam War tactics:

“And they lost, Ernesto.”

The anti-Kavanaugh occupiers lost. The 2011 anti-Walker occupiers lost. The Occupy Wall Street occupiers lost (in that their monthslong exercise in poor hygiene and rape changed nothing regarding Wall Street). Smart humans would look at those losses and say, “That’s a tactic I shall not try.” But the right doesn’t have many smart humans. It has children who look at those unsuccessful tactics and say, “Weeeeee, that looks like a hoot! Let’s fail like them, knowing that we’ll be judged harsher for it!”

I’ll go one step further and say that not only did the anti-Kavanaugh, anti-Walker, and Occupy Wall Street protesters lose, but the BLM protesters will lose too. BLM got a statistically insignificant number of cities to impulsively slash police budgets last summer. The frightened cities (Minneapolis) and the retarded ones (NYC). But by and large the “defund the police” movement did not succeed. Top dogs like Obama criticized it, and there’s already regret in the places where it was tried. Yes, anarcho-tyranny is in the cards for us, but it will arrive via George Soros-funded electioneering (the installation of “progressive DAs”) and not via riots (much as how Scott Walker was eventually defeated not by Capitol-occupiers but PACs and voter drives). The riots minus Soros (the brains, the money) are ineffective. The “magic” lies not in the street brawlers but in the man with the cash, the smarts, and the ability to work the system.

Have you realized that now? That nothing matters if voters aren’t effectively engaged? That self-indulgent “We’re just doin’ what they do” fuckery between partisans doesn’t appeal to the ordinary working folks who have better things to do than get involved in the drama. Rioting and hooliganism does not resonate with voters. Not when “our side” does it, not when “their side” does it.

Lin Wood and Sidney Powell—whether as moles, hucksters, or genuine paranoid schizos—purposely depressed the vote in the Georgia runoff (with ample help from MAGA Twitter). And as Ann Coulter (as always, the adult in the room) so accurately pointed out, Trump helped depress the vote there too. And the Georgia loss was immediately followed by an explosion of stupidity that’s going to stick to the right for a generation. Rightists will never live this down; footage from 1/6 will become the left’s version of the “crying Hillary supporters” clips that played nonstop in the rightosphere for the past four years. The Capitol incident has already been used to nuke rightists off social media by the thousands. It’s been used to sully anyone who has legitimate questions about election irregularities. It’s being used to choke off funding for Republicans. This is Charlottesville on a national scale. Now everyone on the right is going to be hit with a new version of the “very fine people” slam (“You supported insurrection”), and if your first thought upon reading that is “But it’s unfair” well stick it up your ass because it’s not up to “them” to be fair it’s up to you to not do stupid and pointless shit that can be used against you.

Richard Spencer’s “Roman salute.” In a way, that’s the kind of thing that defined the Trump presidency coming in, and now, going out. “Naughty boys” making it harder for everyone else with their “We’re such larky little imps” bullshit (It was ROMAN, not Nazi! Oh, I’m so deliciously precocious!”).

“Yes, we stormed the Capitol, but look how puckish we are with our wacky costumes and funny hats and—oh no, people got killed? Well, don’t judge us unfairly; the left does bad stuff too!”

As I wrote several weeks ago, the defining domestic issue post-Trump will be crime, and in one fell swoop the “imps” have robbed the right of the moral authority to condemn leftist anarcho-tyranny. “We were just doing what they do” can be reverse engineered to “Well, they are just doing what you do.”

The Capitol stormers have now made it a hundred times more difficult to counter Soros and his minions.

And yet all of the negative fallout from 1/6 could be excused if there had been some point to the endeavor. There’s no shame in suffering repercussions after a worthwhile or potentially beneficial action fails. But 1/6 was all for nothing. There was no goal, no plan, no map to a good outcome.

There was no way the damn thing could’ve gone right. That’s what kills me.

This is what happens when you put children, memers, LARPers, and clowns in charge of the heavy lifting.