What if Lions Are Better Than People? 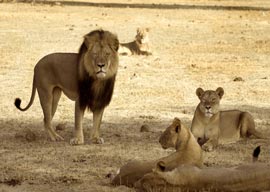 Cecil and his pride

But I will tell you that in a prison they crucified a cat before ourselves. They beat nails in the feet of the cat and the cat was hanging with the head down, and can you imagine how this cat screamed and the prisoners, mad, bead [sic] on the door, “Free the cat, free the cat, free the cat,” and the Communists very polite, “Oh, surely we will free the cat, but give the statements which we ask from you and then the cat will be freed,” and I have known men who have given statements against their wives, against their children, against their parents to free the cat. They did it out of madness, and then the parents and the wives have been tortured like the cat. Such things have happened with us.

A particular species of pinched, finger-wagging moralists agree: If you love animals more than people, you are ethically and intellectually defective, and possibly a psychopath.

Take their hero and role model G.K. Chesterton, who opined, “Wherever there is Animal Worship there is Human Sacrifice.” Interestingly, I haven”t (yet) spotted that aphorism plastered onto any of the disapproving right-wing photo memes still clogging my Facebook timeline, which contrast the outrage over the killing of Cecil the lion with the (alleged non-)reaction to those gruesome Planned Parenthood videos.

I resent being indebted to The American Conservative‘s Rod Dreher for anything. (In fact, he owes me, but that’s a long, boring story.) However, I first read the above statement by Protestant pastor Richard Wurmbrand”testifying before the Senate in 1966 about being tortured in a Rumanian gulag”in a long-gone Dreher column at, I think, beliefnet.com. Dreher has since recycled it repeatedly, and who can blame him?

“In their attempts to maintain the moral high ground, those on either side, ironically, have only advertised their own puny capacity for compassion.”

While many of Wurmbrand’s tortures were far more stomach-turning, I was haunted by that particular story, and not for the noblest reason. Whenever I encountered some fourth-rate Chesterton puffing in the Letters to the Editor about “cheap sentimentality” and “misanthropy,” I wanted to ask them what they”d make of Wurmbrand‘s fellow prisoners.

Dennis Prager”whom I much prefer to the “Apostle of Common Sense“”has been troubled by this particular human trait for decades:

Since the 1970s, I have asked students if they would first try to save their drowning dog or a drowning stranger. And for 40 years I have received the same results: One third vote for their dog, one third for the stranger, and one third don”t know what they would do.

Prager believes the timing is important, that the West stopped teaching “that human beings are created in God’s image and animals are not” during the 1960s.

But surely those imprisoned Romanian Christians weren”t shallow, simpleminded, or spiritually retarded. They were nowhere near Berkeley, or Brooklyn.

And yet they were moved to fatal pity by the cries of a tortured feline.

So if individuals such as those”deeply grounded in an ancient faith”could be driven to betray their families for the sake of a cat, can we so easily condemn those among us”whose “religion” begins and ends with “makeshift memorials””when their hearts fairly break for a faraway lion?

Last week, I was perturbed by the widespread implication from some of my fellow conservatives that I was incapable of being”or had no “right” to be”simultaneously disgusted by the senseless slaughter of a lion and the sale of human remains.

In their attempts to maintain the moral high ground, those on either side, ironically, only advertised their own puny capacity for compassion.

Then I discovered the limit of my own. After a day or two, the online arguments veered in another direction:

Real and would-be “old Africa hands” on the left began defending big-game hunts because they benefit the locals.

And the trouble is”having endured 50 years of commercials showing teary-eyed little black kids still covered in flies, as well as the sick joke that was Live Aid“my feelings about “the locals” are bookended by Heather No. 1’s eye-rolling “God, aren”t they fed yet?” and Sam Kinison’s “You live in a desert! Get out of the desert!!!”

“The meat from hunted big game feeds the tribe,” someone scolded me on Facebook.