What if Those Bikers had Been, Like, Another Color? 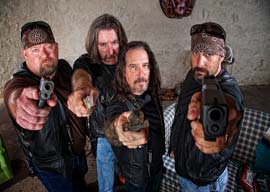 That’s exactly what’s happened in the idiotic editorial aftermath of the May 17 lunch-hour shootout between rival biker gangs at a Hooters knockoff “breastaurant” called Twin Peaks in south Waco, TX.

Details remain sketchy about the incident and, as is typically the case with such violently chaotic events, eyewitness testimonials wildly contradict one another. What is known is that nine people died. All of them were reportedly bikers, and all but one or two of them appear to have been members of the Cossacks motorcycle gang.

At least one victim was a member of the larger and better-organized Bandidos gang. His name was Manuel Isaac Rodriguez, so I’ll go out on a limb here and guess that like George Zimmerman, he was one of those “white Hispanics.” The only shooting fatality that was allegedly “unaffiliated” with an organized biker gang was Jesus Delgado Rodriguez”again, I’ll presume he was a “white Hispanic.”

“Only in America can the media take a deadly shootout among white and Hispanic bikers and somehow make it all about black people.”

What’s intensely unclear at the moment is exactly who did most of the killing. Some biker-friendly witnesses claim that cops killed every last biker. Other estimates lowball it, asserting that police killed four out of the nine victims.

That’s right”even by a low estimate, cops killed four presumably white gang members. And yet no whites rioted. To my knowledge, the last group of reckless arsonists who tried to burn Waco down was the ATF in 1993.

This time around, police swiftly quashed the violence and promptly arrested 172 bikers and biker associates who’d been at the restaurant during the shootout, charging them all with criminal conspiracy and setting each individual’s bail at a steep $1 million. In short, police showed a much more aggressive response to this incident”which couldn’t have lasted more than five minutes”than they did to prolonged rioting in Ferguson and Baltimore. But if you were merely to note this fact, you would be deviating from The Script and told to shut your filthy bigoted piehole.

This site shows mug shots of 153 arrestees; of these, a full 42 of the police descriptions classify the accused as “Hispanic” rather than white. Since the Cossacks are affiliated with the whites-only Hells Angels and the Bandidos have always been open to Hispanic membership”even their logo depicts a gun-and-machete-wielding male in a sombrero”it’s probably not entirely insane to assume that most of the Hispanic arrestees were affiliated with the Bandidos. It might not even be completely cuckoo to wonder whether a subtext of this ongoing Cossacks/Bandidos rivalry has something to do with white/Hispanic ethnic tension.

According to the FBI, the Bandidos are affiliated with the Mexican drug cartel Los Zetas, so they are apparently much more Hispanic-friendly that many in the media would allow. The sputtering scribes who complained about how “the media” handled this incident framed it mostly as an example of rampant white-on-white violence which, as everyone knows, “the media” downplays because “the media” clearly hates black people. A saner argument would be that since the media all but ignored the Hispanics in this equation, the media hates Hispanic people and loves blacks. But the media will call you insane for trying to make that argument.

Much was made of a photo depicting white bikers calmly assembled under the supervision of a gun-wielding cop. The inference we were instructed to draw from this photo is that cops enjoy wearing riot armor and spraying innocent black protestors with tear gas, while they treat murderous white criminals with kid gloves. An alternate inference one could draw from this photo is that white arrestees are less likely to resist arrest than newly canonized black criminal-saints such as Mike Brown, Eric Garner, and Freddie Gray. But that would be racist, so sweep all traces of that thought from your mind.

There was also wailing and gnashing of teeth over the fact that “the media” didn’t make a big stink about the “root causes””such as poverty and single-mother families”of such lawlessness. Again, this was trotted out as evidence that the media is racist against black people, rather than the more likely explanation, which is that the media is constantly making excuses for black people.

And, but of course, there was loud and innumerate screaming about how America only focuses on black criminality, making it seem as if blacks are, you know, disproportionately represented in criminal behavior or something, which everyone already knows is a completely nutty idea.