When Educators Wind Up Incarcerated 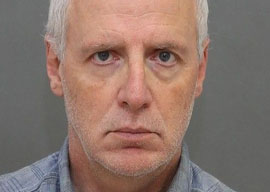 You”ll notice pretty quickly if you tune in to underclass sideshows such as Judge Judy that the hapless participants, whatever their age or color, have one thing in common:

“Incarcerated” is the biggest word they know.

They pronounce it so proudly, too, clearly chuffed about their mastery over all five syllables. Best of all, they”re serenely oblivious to just how idiotic this dubious “accomplishment” makes them appear to the non-felonious majority.

The elite’s version of “incarcerated” is “educator.” Have you noticed that no one’s just a lowly “teacher” anymore?

Like losers who try to give themselves cool nicknames that never catch on, “educators” don”t seem to realize the antipodean effect this pretentious affectation has on mere mortals.

So what fearsome cosmic forces might be unleashed when worlds (or in this case, words) collide?

On July 8, Toronto police raided the home of one Benjamin Levin. Two days later, the charges against him added up to seven counts of child exploitation“including possessing, creating, and accessing child pornography”and counseling “someone online on how to commit a sexual assault on a child.”

The 61-year-old belongs to a prominent, powerful family. One of his brothers was the long-time career-making books editor of the nation’s most prestigious paper; another was Canada’s ambassador to Cuba.

And that boy Benjy is no schmendrick himself. He’s one of Canada’s leading “educators.” He’s a teacher of teachers, in fact, at the Ontario Institute for Studies in Education, a breeding ground of Marxist mental illness and faddish pedagogy.

That means he was the civil-service CEO while his fellow “educators” fought (and failed, thanks to parental objections and conservative media mockery) to launch a radical new sex-ed curriculum.

Levin also recently worked on the transition team for Ontario’s first lesbian premier, Kathleen Wynne, who’s vowed to push that controversial curriculum down the slippery slope and into the province’s classrooms, parents be screwed.

(Here’s a photo of Levin and Wynne at last month’s Toronto gay pride parade. Note that Levin is seated at the right hand of the Son”that is, possible future Prime Minister of Canada Justin Trudeau. In other words, the guy’s kind of a big deal.)