When Heroes Are Villains 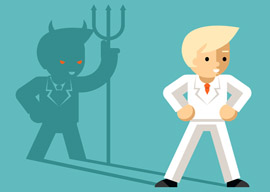 Our upside-down culture was particularly evident on Memorial Day. Most of us can”t fathom what it was like to be a soldier in Vietnam or Korea or WWII. Few even try to conceive of what it was like to be one of the 620,000 who died in the Civil War. However, Memorial Day should be a time when we at least try. Not for A&E. They chose that day to tell us how horrible it was to be a slave 400 years ago. These NoWhiMPs get a whole month and they can”t even give us one day. This irony became painfully obvious when we learned that dozens of blacks were killed by blacks on Memorial Day weekend.

Luckily, a NoWhiMP took our side and spoke out about Roots being played on Memorial Day. Snoop’s take was that it was being used to mock blacks and brag about how we fooled them, but agreement from the other side is so rare, I”ll take it. Snoop made his bones on human bones writing rap songs about the drugs he’s dealt, the women he’s pimped, and the murders he’s committed. This isn”t just acceptable, it’s cool. Kids are pimps for Halloween and to be “pimpin”” is to be doing a great job. I”ve never seen a kid dressed as a meth dealer for Halloween and I”m not sure if “methin”” would be doing a good job.

If you call “good” bad long enough, the definition of the word changes. If everyone is racist, nobody is. They have been accusing the West of being evil for so long, we”re now embracing evil. Trump personifies everything they hate and as they scream about how racist, sexist, and homophobic he is, we smile and say, “Good.”