When Morad Comes to Munich 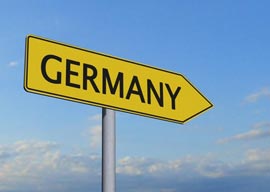 It can be safely assumed that Morad Almuradi will not come to Munich anytime soon. Because Morad delivered, and for this we should be truly grateful, a hilarious coup de grÃ¢ce to the incessantly touted notion that Germany’s state-sponsored migrant tsunami could be in any way manageable. Based in Amsterdam, one of liberalism’s foremost strongholds, Morad is a pious Muslim from distant Morocco who took offense at our soon-to-be-celebrated Oktoberfest in Munich and thus wants it scrapped once and for all.

His bone of contention is not only the rivers of booze in which the giant festival sails happily along but also the multiple displays of magnificent bosoms that rest in precariously low-cut dÃ©colletÃ©s and belong to equally magnificent young ladies in dirndl dresses who serve Bavarian beer in huge tankards to local and foreign visitors alike. Keeping in mind the progressive substitution of indigenous Krauts with largely Muslim intruders, Morad worries in a dubious petition blog conveniently called Change.org about the present emotions and future salvation of his beleaguered coreligionists.

“We docile and ever-repentant Germans are finally fed up, and this wondrous occurrence has engendered a turn of the tide that could develop into a real tsunami for those in power.”

Even if this is quickly and unconvincingly declared to be a fake, it is an arrow that aims straight at the heart of every feeling German. Concurring to such an absurd demand, as has happened elsewhere far too often in the past, would augur the ultimate surrender in an epoch where surrender has been flaunted as the supreme politically correct comportment. That is, at least in “Absurdistan,” as Germany is nowadays called by its more sarcastic burghers. Yet something finally stirs, and it can be a safe bet that vast numbers of Bavarians and their allies would band together and defend the hallowed merrymaking with hayfork and cudgel if the situation demands it. Which might also entail a spot of tarring and feathering for Morad himself if he ever decides to turn up and press his petition. And which I, as a decent Christian, and thus at the risk of a few more eons in Purgatory, would nevertheless heartily condone.

This inane anecdote may seem somewhat frivolous to the detached reader, yet it is in fact a rather solemn one. Because we docile and ever-repentant Germans are finally fed up, and this wondrous occurrence has engendered a turn of the tide that could develop into a real tsunami for those in power. With other words, even the farthest hillbilly in lederhosen realizes by now that it isn”t Christian compassion, trendy commiseration, or just downright incompetence on the part of our rulers who import hordes of aliens who openly declare their sacred intention to subjugate us and cut off our heads as decreed by their prophet, but part of a sinister machination that somehow got terribly out of hand.

Because what really happened is that entire quarters in cities and towns alike have turned into no-go areas where the law won”t tread anymore. Ruled by vicious clans from Albania, Turkey, Lebanon, et al who run the usual rackets, they also sell you stolen BMWs or fake Syrian passports, deadly crack or underage girls hooked on heroin, transplant kidneys or just plain murder on demand. Meanwhile, Germany on the whole has become a paradise for foreign miscreants who occasionally commit crimes so cruel and horrible that it defies any imagination and who, if caught at all by an entirely overworked police, are considered most benignly by liberal judges who tread the officially decreed line and do not jeopardize their careers. This state of affairs is massively backed up by a subservient media that will never divulge names and nationalities of culprits, but mentions in the best of cases that the lad was squat and had a “southlandish” demeanor. These policies are understandable if one knows who pays the journalists. The publisher of Die Zeit, for example, once one of Germany’s most revered gazettes and now rapidly in decline, is on the payroll of at least seven different NGOs, all owned by the CIA, the State Department, and similar transatlantic outfits.

He and his lot were the first who caught a whiff of the slowly changing tide. It began with a ridiculously biased covering of the illegal coup d”Ã©tat in Ukraine and moved on to a rapidly increasing and equally illegal influx of migrants and refugees. Suddenly the word for “lying press” made the rounds and gathered momentum, so much so that it was elected by a profoundly miffed media as the “Un-word of the Year.” Which, needless to say, got widely and gleefully proliferated by an always more renitent readership.