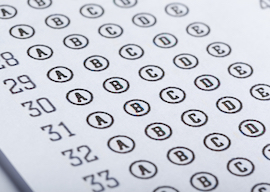 A new study from Georgetown University reveals that if the student bodies of the 200 most selective American colleges were enrolled solely on objective SAT or ACT aptitude test scores, their student bodies would increase from 66 percent white under the current subjective system to 75 percent white.

Ironically, this study was supposed to prove, in the wake of the entertaining and immensely popular Varsity Blues scandal in which TV actresses bribed their lowbrow kids into USC instead of Arizona State, that affluent white people have unfair advantages in college admissions. The authors at the Georgetown Center on Education and the Workforce state:

The recent college admissions scandal has reinforced a sense that social status, affluence, and contacts allow special access to selective colleges. Our data confirms that the affluent have extraordinary advantages in college admissions.

But instead, their numbers turned out backwards from their desired results.

The black/Latino percentage under a test-only system would fall from the current 19 percent of the student bodies of the top 200 colleges to 11 percent. (Unfortunately, the authors don’t break out blacks and Latinos separately, dubiously asserting, “We combined data for Blacks and Latinos due to small sample sizes,” although my suspicion is that they did it to cover up just how small the black share would be without quotas.)

More surprisingly, the Asian percentage would drop from 11 percent to 10 percent, even though Asian test scores have been climbing throughout this century.

Under a test-only recruitment system, kids from the top 25 percent of family income ($122,000 or higher) would increase from 60 percent to 63 percent of selective student bodies.

And boys would do better than under the present arrangement, increasing from 50 percent of the current student body to 54 percent.

In other words, under a less subjective system of college admissions, the big winners would be the Current Year’s designated losers: white boys.

Amusingly, the researchers tried to assert that, because we all know a priori that white males are bad, their data demonstrates that standardized testing must be bad too. The Wall Street Journal, for instance, sums up the report:

The most prestigious U.S. campuses would be wealthier, whiter and more male—leading researchers to question the role standardized testing plays in a fair, comprehensive admissions process.

But to those of us who have been paying careful attention to college admissions in this century, this new report is just more evidence that smart white males have become the most overlooked demographic.

What explains these results?

“Under a less subjective system of college admissions, the big winners would be the Current Year’s designated losers: white boys.”

Some fraction of the gaps between the existing scheme and the theoretical alternative are of course due to today’s overt affirmative action, especially for blacks and Hispanics.

And another proportion is caused by choices in the contemporary “holistic” admissions system. For example, colleges weigh grade point average highly, which girls tend to do better at than boys when test scores are equal. Of course, high school GPA is a decent predictor of college GPA, yet it does have disparate impact on males. But because our society doesn’t worry about discrimination against males, that’s not seen as a problem, as it would be if girls were hurt.

And there’s an important but subtle third factor that was glossed over in the report and in most of the initial media coverage: In present-day America, white males tend to be less narcissistic and ambitious about getting into prestige colleges than are other groups. So they apply to fancy colleges less often relative to their test scores.

This last point ties into the arcane details of the methodology of the study. These numbers do not, as many have assumed, represent what the outcomes would be if the current applicants to the top 200 schools were evaluated solely on their test scores.

This methodology clarifies otherwise surprising results, such as the Asian share dropping by 10 percent. It’s not that prestige colleges are hungry for more Asians, it’s that Asians are addicted to applying to prestige colleges.

We live in an era in which we are constantly lectured that white males are always ruining everything for everybody else by their feelings of entitlement and privilege. But when it comes to fancy colleges, the opposite is true. At any above-average test score, 18-year-old white guys are less likely to attend a prestige college and more likely to enlist in the military, enter a trade, or go to a local non-elite Directional State college.

It used to be that even in California, white gentiles weren’t that ambitious for college glory. For example, when I went to a Catholic high school in the middle-class San Fernando Valley in the mid-1970s, only two or three students in my graduating class of 180 bothered to apply to Stanford.

In contrast, at the largely Ashkenazi public Beverly Hills High School on the ritzier side of the Hollywood Hills, 180 seniors applied to Stanford.

Over the decades, Beverly Hills-levels of academic ambitiousness have radiated outward to much of coastal California, but less so to inland states.

A study by Caroline Hoxby of Stanford and Christopher Avery of Harvard found that the students scoring at the 90th percentile who are least likely to apply to elite colleges are red-state white males. If our nations’ rich colleges wanted to search out potential high achievers who are most marginalized under the present system, high-scoring white guys in flyover America are the main source of untapped talent.

But nobody is interested in hearing that message these days.

Many would say no, offering clever explanations for why worse is better.

One concern is that a more selective college would be harder, thus increasing one’s chance of flunking out. This is notoriously true at Caltech, but in general, the opposite seems to be the case: Richer colleges, private and public, have more resources with which to coddle their students, while humbler public colleges tend toward sink or swim. The Georgetown study reports:

I suspect a roughly similar disparity holds for white students as well, although, as so often, nobody cared enough about whites to print their numbers.

Private colleges, of course, tend to cost more than in-state public colleges. On the other hand, families with five-figure incomes shouldn’t let themselves be intimidated by the absurd list-price tuitions advertised by private colleges, since they discount heavily, calling it “financial aid.”

A curious feature is that the nicer the college, the less nasty the actual tuition can be due to the staggering endowments that the superelite schools possess. For example, Yale is a famously nice place to go to college, and it is free for students from families making below $65,000. A family making $150,000 annually could perhaps expect a discount of about $125,000 off the four-year list price of $270,000. Thus, in Yale’s 2018 class, 86 percent graduated debt-free.

Another fear of smart young whites might be that antiwhite wokeness would be worse at elite colleges. That’s a possibility, but I’m not sure if the data supports it. Unlike in the 1960s, when leftism was a top-down phenomenon starting among bright kids at Berkeley, today’s wokeism is embarrassingly low in IQ. For example, the two colleges that have done the most serious damage to themselves, U. of Missouri and Evergreen State, were only middling in reputation before their meltdowns.

Another question is how to improve college admissions tests.

The SAT folks recently announced an “Adversity Score” intended to put a thumb on the scale in favor of students at slum high schools. Their own presentation, however, documents that it would make the SAT worse at predicting college grade point average. And it appears it would benefit Latinos at the expense of blacks and Asians by hurting whites. Just what Americans need: more Immigrant Privilege.

Because the SAT and ACT compete for business, they’ve both been making their scoring easier, which pleases applicants and colleges wanting to advertise higher-scoring students.

Unfortunately, combined with the growth of test prepping, score inflation means that ever more students are beginning to bang up against the tests’ maximum (1600 on the SAT and 36 on the ACT), with scores being determined less by long-term differences in intelligence and more by random variations in the number of mistakes made.

Fortunately, it’s about time for the SAT and ACT to follow the Graduate Record Exam into computerized adaptive testing, in which the difficulty of the next question changes in response to whether you got the last one right or wrong.

The testing services could then keep their scoring the same as today, so that a 1250 is still a 1250 and a 26 a 26, but also increase the maximum score one standard deviation from 1600 to 1800 on the SAT and from 36 to 40 on the ACT. This would allow the truly bright to stand out better from the crowd.

Of course, in the long run, the influx of Tiger Mothers reduces the utility of the SAT and ACT as tests of intelligence, due to their obsession with test prepping for their kids.

The college admissions tests were invented long ago for a culturally WASP America where trying to outsmart an intelligence test was considered unsporting. Then Stanley Kaplan, with the assistance of the 14-year-old future senator Chuck Schumer (D-NY), invented test prep. Later, immigrants from Asian cultures that had been test prepping for centuries introduced undreamt-of new levels of grinding.

One problem is that endless prepping to beat an aptitude test tends to be a huge waste of time. Learning how to outsmart intelligence tests doesn’t seem to actually make you smarter.

Perhaps the best that can be done under the circumstances is to replace as college admissions exams the current aptitude tests with subject tests, such as Advanced Placement exams. If Tiger Mothers are going to subject their scions to hundreds of hours of test prep, at least have them test-prep on actual subjects such as chemistry and American history, where they might learn something.