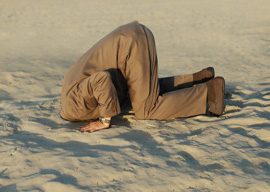 On a call-in radio program recently, we had been airing my infamous assertion in a Taki’s Magazine column back in April that white people should avoid large concentrations of blacks as likely to be dangerous.

A caller asked me why I would not be similarly fearful of a large concentration of whites. I made the obvious reply”that the element of racial animus, of black hatred of whites, would be missing. Then I added, off the cuff: “Anyway, why would anyone be scared of a crowd of whites? Whites aren’t going to do anything to you. Let’s face it, white people are pussies.”

The remark passed without comment, but I regretted it nonetheless. It was, after all, an expression of ethnomasochism”of contempt for one’s own people. Having railed against ethnomasochism considerably the past few years, I really should be more careful what I say about my own ethny.

It’s a thought that keeps coming up, though. It came up yesterday when I was reading this story about France’s ban on Muslim women wearing the burqa (full-body with face veil) and niqab (shoulder-length face veil).

“Of civilized peoples in general, I think it’s only whites that are pussies, and perhaps only white Gentiles.”

Following the trashing of that Gypsy camp by French police the other day, I’d been nursing hopes that at least the French were holding out against the tide of pussification. Alas, no”not in the matter of burqas and niqabs, anyway:

Since the law went into effect, 425 women wearing full-face veils have been fined up to 150 euros ($188) each and 66 others have received warnings, said Pierre-Henry Brandet, spokesman for the Interior Ministry. But even the police concede that they rarely enforce it, having no desire to further increase tensions.

Heaven forbid law-enforcement officers should “increase tensions” by enforcing the law! And so the Muslims are free to continue insulting French culture and sapping away at French nationhood.

In Britain things are worse, as one of the Muslims in the Times story, a Monsieur M’hammed [sic] Henniche, tells us with satisfaction:

But when he visits London, Mr. Henniche said, the first thing he notices is the number of women wearing the niqab walking freely on the streets. “I think, ‘Whoa, it’s an open country, English people are open,’” he said. “Such tolerance is a good thing.”

Well, it sure is a good thing if you’re an African or West Asian Muslim keen to escape the poverty, ignorance, intolerance, corruption, and backwardness that your ethny”assisted by your religion”has created in the land of your origin. It’s hard to see that it’s been a good thing for the native British, who would much prefer to have been left alone in their warm-ale-swilling, rhubarb-chomping, dentally challenged, eccentrically plumbed, and uniquely foggy culture.

But whose fault is it that London and Liverpool’s streets are now blighted with what expats living in Saudi Arabia refer to as “BMOs””black moving objects?

Why, it’s the fault of the British themselves for letting it happen. You get what you vote for. No native Briton should ever have cast a vote for any party whose platform did not include a clear ban on mass Third World immigration. Why did the British yield on this? Because they’re pussies.