Who Cut the Balls Off San Francisco? 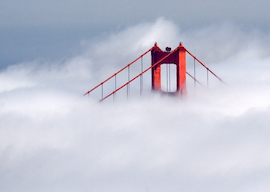 MONTREAL—So now San Francisco is banning e-cigarettes, because a City Council member discovered there are still people making personal decisions about what to do with their lives. They’ve been trying to eliminate these people for three decades now, but some individuals just refuse to learn.

It’s been a year or so since I wrote about San Francisco’s ban on the sale of fur in a move that does nothing for animals but destroys businesses that have been established there since the 19th century. Unfortunately I can’t really devote 52 columns a year to cataloguing products banned by San Francisco. In the past they’ve outlawed plastic bags, clove cigarettes, Coke machines, bottled-water machines, people playing stickball in the street, people playing chess in the street, pet stores, goldfish, masked balls, and the practice of letting your dog stick his head halfway out the window while you’re driving. Long ago they banned toys being given away with Happy Meals at McDonald’s. There are several states that have been under sanction by San Francisco at various times, with city employees forbidden from traveling on official business to Arizona, Kansas, Mississippi, North Carolina, Tennessee, Alabama, Kentucky, South Dakota, or my home state of Texas. (Which is fine with me—I don’t really want any bowdlerizing Californians accidentally attending a rodeo and deciding to file animal-cruelty charges at the United Nations.)

It’s illegal to ride a Segway in San Francisco, to package food with Styrofoam, to declaw a cat, or to serve chocolate milk in schools. No one in government is allowed to make any contract with any company that uses tropical hardwood—“Get the rugs out! The floor inspectors are coming over!”—and no school is allowed to offer Junior ROTC because young people who want to follow their families into military service are probably deranged. Don’t try to walk more than eight dogs at a time—even if they’re toy poodles and Chihuahuas—and don’t give your 5-year-old a slingshot for his birthday, because that’s an illegal weapon.

If you asked the high sheriffs of the city exactly what’s going on here, they would give you some version of San Francisco knows better.

“Public scolds don’t care about collateral damage, they’re too busy telling the rest of the world how to behave.”

I’m especially pained by San Francisco becoming an experiment in proto-communist lifestyle engineering, because my love for the city is based on its history of harboring fiercely independent iconoclasts. I consider Ambrose Bierce my mentor, and he flourished there from 1866 to 1899, fighting the corrupt railroad barons, always carrying his Civil War sidearm because his prose was so powerful it could cause lifetime grudges and feuds. (“San Francisco,” wrote Bierce, “is the place where most people were last seen.”) In the ’80s I performed at a punk club called Wolfgang’s owned by impresario Bill Graham, a rock & roll pioneer, and Graham was following in the footsteps of Lawrence Ferlinghetti, patron saint of the Beat movement, whose City Lights bookstore still stands but whose fellow who-gives-a-fuck writing buddies have long since passed on, unaware that their cigarette butts, open whiskey bottles, and crash pads would all violate various ordinances in today’s San Francisco. Carol Doda, another friend of mine from the Wolfgang’s days, was the first nude dancer in the days when it was called go-go dancing, and she survived multiple arrests for showing off what she called her “Twin 44s” before becoming such an icon that the cops backed off and pretty much left her alone at the famous Condor Club. That club was, in turn, a precursor of the Mitchell Brothers’ O’Farrell Theatre, where modern pornography and the lap dance were born. There was a period in the late ’80s and early ’90s when I would guest deejay on KFOG, probably the greatest rock station ever, and one day Jerry Fucking Garcia called in on the request line.

In other words, San Francisco was always the place where people didn’t make rules, they broke them. They didn’t ask permission and they didn’t ask forgiveness. It was a safe haven for unconventional lifestyles, unconventional opinions, and unconventional behavior. I wonder what Hunter S. Thompson, a frequent resident, would think of the ordinance against stink bombs, since he loved every kind of explosive device but especially the ones that caused noise and mischief.

Hell, I know what he would think of it. It would inspire him to toss one into the City Council chambers. That would be the place where they sit around debating the effects of Juul electronic cigarettes. Juul is a San Francisco company, so once again the city is eating its young, trying to legislate out of existence a $2 billion local firm that employs 1,500 people. The argument is that young people shouldn’t be vaping, and the little bastards get away with it because Juul products so closely resemble flash drives that they can hide them from clueless teachers. Leave it to San Francisco to deal with an enforcement challenge with a blanket ban—but, of course, life is always more complicated than that, so these are the same faux cigarettes that millions of people use to stop smoking real cigarettes. Public scolds don’t care about collateral damage, they’re too busy telling the rest of the world how to behave.

In some ways San Francisco’s descent into madness is self-correcting, because eventually so many groups will be pointing fingers at so many other groups, demanding lifestyle alterations designed to create healthy specimens of Correct Living, that the whole peninsula will devolve into something resembling the Soviet Union in 1965, if they’re lucky, and Venezuela in 2019 if they’re not. Social engineers are an arrogant lot, and they’ll keep talking and legislating until the last iconoclast has been castrated and jailed. They can’t actually kill him because they outlawed cemeteries