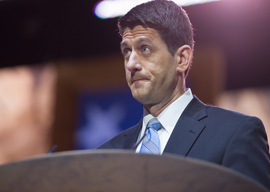 Forty-eight hours after Donald Trump wrapped up the Republican nomination with a smashing victory in the Indiana primary, House Speaker Paul Ryan announced that he could not yet support Trump.

In millennial teen-talk, Ryan told CNN’s Jake Tapper, “I’m just not ready to do that at this point. I’m not there right now.”

“[T]he bulk of the burden of unifying the party” falls on Trump, added Ryan. Trump must unify “all wings of the Republican Party, and the conservative movement.” Trump must run a campaign that we can “be proud to support and proud to be a part of.”

Then, maybe, our Hamlet of the House can be persuaded to support the elected nominee of his own party.

Excuse me, but upon what meat has this our Caesar fed?

Ryan is a congressman from Wisconsin. He has never won a statewide election. As number two on Mitt Romney’s ticket, he got waxed by Joe Biden. He was compromise choice as speaker, only after John Boehner went into in his Brer Rabbit “Zip-a-dee-doo-dah” routine.

Who made Ryan the conscience of conservatism?

Who made Ryan keeper of the keys of true Republicanism?

“Who made Ryan keeper of the keys of true Republicanism?”

Trump “inherits something … that’s very special to a lot of us,” said Ryan, “the party of Lincoln and Reagan and Jack Kemp.”

But Trump did not “inherit” anything. He won the nomination of the Republican Party in an epic battle in the most wide-open race ever, in which Trump generated the largest turnout and greatest vote totals in the history of Republican primaries.

What is Ryan up to?

The hubris here astonishes. A Republican establishment that has been beaten as badly as Carthage in the Third Punic War is now making demands on Scipio Africanus and the victorious Romans.

This is difficult to absorb.

Someone should instruct Paul Ryan that losers do not make demands. They make requests. They make pleas.

What makes Ryan’s demands more astonishing is that he is the designated chairman of the Republican National Convention, a majority of whose delegates and whose nomination Trump is about to win.

Ryan is saying he is ambivalent over whether he will accept the verdict of the Cleveland convention—of which he is the chairman.

If Ryan holds to his refusal to accept the decision of the Republican majority in the primaries, he should be removed from that role. And if Ryan does not come out of Thursday’s meeting with the Donald, endorsing him, the presumptive nominee should turn to Paul Ryan, and, in two words, tell him, “You’re fired!”

That would be a betrayal of the troops who brought Trump victory after victory in the primaries.

To longtime students of politics, there is rarely anything new under the sun. And there is precedent for the shakedown Ryan and his Beltway collaborators are trying to do to Trump.

Paul Ryan is the Nelson Rockefeller of his generation.

In 1960, Gov. Rockefeller refused to challenge Vice President Nixon in the primaries. When Nixon went to Rockefeller’s New York apartment to persuade him to join the ticket, Rocky refused, but demanded concessions in the platform, to which Nixon acceded