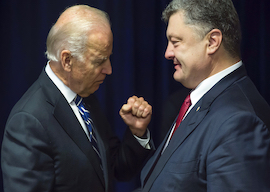 With the revelation by an intel community “whistleblower” that President Donald Trump, in a congratulatory call to the new president of Ukraine, pushed him repeatedly to investigate the Joe Biden family connection to Ukrainian corruption, the cry “Impeach!” is being heard anew in the land.

But revisiting how this latest scandal came about, and how it has begun to unfold, it is a good bet that the principal casualty could be the former vice president. Consider:

In May 2016, Joe Biden, as Barack Obama’s designated point man on Ukraine, flew to Kiev to inform President Petro Poroshenko that a billion-dollar U.S. loan guarantee had been approved to enable Kiev to continue to service its mammoth debt.

But, said Biden, the aid was conditional. There was a quid pro quo.

If Poroshenko’s regime did not fire its chief prosecutor in six hours, Biden would fly home and Ukraine would get no loan guarantee. Ukraine capitulated instantly, said Joe, reveling in his pro-consul role.

Yet, left out of Biden’s drama about how he dropped the hammer on a corrupt Ukrainian prosecutor was this detail.

The prosecutor had been investigating Burisma Holdings, the biggest gas company in Ukraine. And right after the U.S.-backed coup that ousted the pro-Russian government in Kiev, and after Joe Biden had been given the lead on foreign aid for Ukraine, Burisma had installed on its board, at $50,000 a month, Hunter Biden, the son of the vice president.

Joe Biden claims that, though he was point man in the battle on corruption in Ukraine, he was unaware his son was raking in hundreds of thousands from one of the companies being investigated.

Said Joe on Saturday, “I have never spoken to my son about his various business dealings.”

“Soon, it will not only be Trump and Giuliani asking Biden questions abut Ukraine, Burisma and Hunter, but Democrats, too.”

Trump and Rudy Giuliani suspect not, and in that July 25 phone call, Trump urged President Volodymyr Zelensky to reopen the investigation of Hunter Biden and Burisma.

The media insist there is no story here and the real scandal is that Trump pressed Zelensky to reopen the investigation to target his strongest 2020 rival. Worse, say Trump’s accusers, would be if the president conditioned the transfer of $250 million in approved military aid to Kiev on the new regime’s acceding to his demands.

The questions raised are several:

Is it wrong to make military aid to a friendly nation conditional on that nation’s compliance with legitimate requests or demands of the United States? Is it illegitimate to ask a friendly government to look into what may be corrupt conduct by the son of a U.S. vice president?

Joe Biden has an even bigger problem: This issue has begun to dominate the news at an especially vulnerable moment for his campaign.

Biden’s stumbles and gaffes have already raised alarms among his followers and been seized upon by rivals such as Cory Booker, who has publicly suggested that the 76-year-old former vice president is losing it.

Biden’s lead in the polls also appears shakier with each month. Sen. Elizabeth Warren has just taken a narrow lead in a Des Moines Register poll and crusading against Beltway corruption is central to her campaign.

“Too many politicians in both parties have convinced themselves that playing the money-for-influence game is the only way to get things done,” Warren told her massive rally in New York City: “No more business as usual. Let’s attack the corruption head on.”

Soon, it will not only be Trump and Giuliani asking Biden questions abut Ukraine, Burisma and Hunter, but Democrats, too. Calls are rising for Biden’s son to be called to testify before congressional committees.

With Trump airing new charges daily, Biden will be asked to respond by his traveling press. The charges and the countercharges will become what the presidential campaign is all about. Bad news for Joe Biden.

Can he afford to spend weeks, perhaps months, answering for his son’s past schemes to enrich himself through connections to foreign regimes that seem less related to Hunter’s talents than his being the son of a former vice president and possible future president?

“Ukraine-gate” is the latest battle in the death struggle between the “deep state” and a president empowered by Middle America to go to Washington and break that deep state’s grip on the national destiny.

Another issue is raised here — the matter of whistleblowers listening in to or receiving readouts of presidential conversations with foreign leaders and having the power to decide for themselves whether the president is violating his oath and needs to be reported to Congress.

Eisenhower discussed coups in Iran and Guatemala and the use of nuclear weapons in Korea and the Taiwan Strait. JFK, through brother Bobby, cut a secret deal with Khrushchev to move U.S. missiles out of Turkey six months after the Soviets removed their missiles from Cuba.

Who deputized bureaucratic whistleblowers to pass judgment on such conversations and tattle to Congress if they were offended?