Will Feminism’s Next Big “Wave” Finally Be the One That Drowns It? 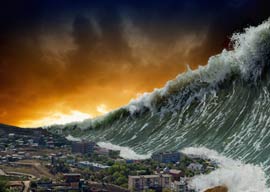 Just like menstrual cramps and labor contractions, feminism comes in waves. Apparently we’re at the end of the third wave and on the cusp of the fourth. I don’t know what any of this means, either, so I looked it up.

It is generally agreed that in the USA, the first wave of feminism ended in 1920 when women gained the right to vote. That wave first started building sometime in the mid-1800s. From the get-go, it was tinged with the spiritual idea that women were morally superior to men, a concept that has remained constant throughout all of feminism’s iterations.

It was ultimately wise”if downright sneaky”for government officials to give women the right to vote, because almost without exception, women will vote for the government every time.

Feminism then entered a blessed four-decade stretch of hibernation, only to awake in the early 60s with Betty Friedan’s The Feminine Mystique and its insistence that domestic bliss was actually an endless loop of slave labor and marital rape for American women. Combined with an eagerness to leap muff-first into the “Civil Rights” movement lest women be left behind, the second wave was hatched like a screeching baby pterodactyl.

This is when feminism started to get truly annoying.

“In the end, feminism’s greatest achievement will be the restoration of the patriarchy.”

It’s when women broke “free” of their dependency on men, only to become dependent on that mack daddy pimp alpha male of all alpha males, Big Brother. And, wouldn’t ya know it, the whole sham was aided and abetted by the CIA. It’s when bras were burned and slogans were chanted and the word “sexism” was coined to compete with “racism.” It’s when feminism became hopelessly intertwined with Marxism and deconstructionism and anticolonialism and all those other -isms that always destroy everything of value. It’s when women claimed an inborn “right” to either kill their fetuses or deliver them to term, and men had no legal right to object to the woman’s decision. Remember, lads”“equality” is always a zero-sum game. If they’re gaining something, you’re losing something.

The sex-positive dames won that battle, because the third-wavers“not to be confused with third-graders, although I could see how you’d make that mistake”revel in “reclaiming” their “sexuality” by painting the word SLUT on their tits, posing for selfies with their armpit hair dyed blue, and having sex with as many creatures on God’s green Earth as possible just to prove that they will not be shamed into celibacy even though you called them fat. It’s where grown women who really should know better yabber endlessly about their vaginas as if it’s somehow profound rather than profoundly silly. Clearly all of the substantive issues have already been decided in their favor, so we’re left with emotional finger-painting.

But as fun as all that sounds, this has clearly been the most annoying feminist wave of all. It peddles obvious falsehoods such as “rape culture” and the “pay gap,” and, most annoyingly of all, the cruel hoax that we still live in a “patriarchy.”

That must be why men die younger, right? The only possible reason for why black women outlive white men in this country is because we’re still suffocating under the iron armpit of the white-supremacist patriarchy…right?

The third phase of feminism began in the mid-1990s and is informed by post-colonial and post-modern thinking. In this phase many constructs have been destabilized, including the notions of “universal womanhood,” body, gender, sexuality and hetreronormativity. [sic]

Got that? Third-wave feminism insists that “gender” is a social construct. That implies the term “woman” is essentially meaningless. It also suggests that “feminism,” by falsely insisting that women exist, will ultimately be dismissed as a tool of the patriarchy. By succumbing to the deconstructionists, the stalwart upper-middle-class white feminists of yesteryear will be swarmed by invading hordes of angry black chicks and men suffering from gender dysphoria who want to sneak a little slice of women’s Oppression Pie for themselves. The psychosis of deconstructionism will lead feminists down a rabbit hole where they’ll be forced to concede that identifying someone by their sex is the very essence of sexism. These ditzy slits will ultimately deconstruct the term “woman” to the point where “women’s rights” is deemed a tool of the patriarchy that must be destroyed.