Will the Oligarchs Kill Trump? 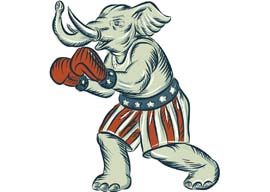 Narrow victories in the Kentucky caucuses and the Louisiana primary, the largest states decided on Saturday, have moved Donald Trump one step nearer to the nomination.

Primaries in Michigan, Mississippi and Idaho on March 8, and in Florida, Ohio, Illinois, Missouri and North Carolina on March 15, may prove decisive. If Marco Rubio does not win his home state of Florida, he is cooked, as is Gov. John Kasich if he does not win Ohio.

Ted Cruz already looks to be the last man between Trump and a GOP nomination that has gone, in the last seven elections, to George H. W. Bush, Bob Dole, George W. Bush, John McCain and Mitt Romney.

All five of those nominees since 1988 seem appalled by Trump’s triumphs, and only slightly less so by the Cruz alternative.

Not in memory has the leadership of a party been so out of touch. The Republican rank and file are in revolt, not only against the failures of their fathers but the policies of their present rulers.

Some among the GOP elites, who have waited patiently through the Obama era to recapture control of U.S. foreign policy, are now beside themselves with despair over Trump’s success.

“Yet no amount of free media can match the shellfire falling on him every hour of every day in every primary state.”

Fully 116 members of the GOP’s national security community, many of them veterans of Bush administrations, have signed an open letter threatening that, if Trump is nominated, they will all desert, and some will defect—to Hillary Clinton!

“Hillary is the lesser evil, by a large margin,” says Eliot Cohen of the Bush II State Department. According to Politico’s Michael Crowley, Cohen helped line up neocons to sign the “Dump-Trump” manifesto.

Another signer, Robert Kagan, wailed in The Washington Post, “The only choice will be to vote for Hillary Clinton.”

Victory for Clinton would mean her remaking the Supreme Court, killing all chances that Roe v. Wade could be overturned, or that we could get another justice like Antonin Scalia before 2021.

What are these renegades and turncoats so anguished about?

Trump calls the Iraq War many of them championed an historic blunder. Trump says that, while a supporter of Israel, he would be a “neutral” honest broker between Israel and the Palestinians in peace negotiations, as was Jimmy Carter at Camp David.

Trump says he would “get along very well” with Vladimir Putin, as Richard Nixon got along with Leonid Brezhnev and Mao Zedong.

Trump would launch no new crusades for democracy. He would not oppose Russia bombing ISIS. He would build that wall on the border. He would transfer from U.S. taxpayers to rich allies more of the cost of defending themselves.

Do not most Americans agree with much of this?

Yet this neocon ultimatum about deserting should the voters nominate Trump testifies eloquently to their loyalty.

With every ex-president and ex-nominee repudiating Trump, and foreign policy elites going rogue, the GOP hierarchy is saying: We will cut Trump dead, just as the Rockefeller-Romney crowd cut Barry Goldwater dead.

This is pure my-way-or-the-highway politics.

But it raises anew the question: Can the establishment stop Trump?